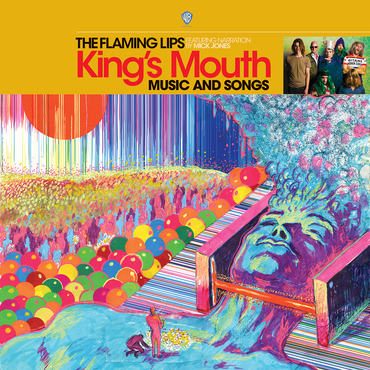 Two years have passed since Oklahoma’s Flaming Lips last graced us with an album, with the last arriving in the shape of ‘Oczy Moldy.’ Calling anything the Flaming Lips do ‘offbeat’ at this point is a complete redundancy, but some of the criticism they received for that release doesn’t seem to have stung them in the slightest. If anything, they’ve only become more obscure and experimental.

The Flaming Lips are, of course, anything but a band of young up and comers. They’ve been with us since the late 1980s and should by rights be settling into middle age comfortably, and sitting back on their riches. That isn’t really the way of this band, though. While high-art concepts and openly pretentious visual and musical ideas are usually the preserve of the young, the Flaming Lips are still showing bands half their age how to employ such notions effectively. Make no mistake; they’re still as weird as they ever were. If you were in any doubt about that fact, we’ll submit the fact that the entire album is narrated by Mick Jones from the Clash as evidence to support our case.

This latest album, entitled ‘King’s Mouth’ arrived on Record Store Day (which has now become an international celebration of new music, and our favorite day of the year), and it finds the veteran band doing anything but playing safe. The core elements of their identity are here, from the soaring synths to the ‘acquired taste’ vocals from Wayne Coyne, but they’re once again arranged in a completely new order. It sounds a little lo-fi in places, but this is unmistakably a brand new sonic landscape of the type only the Flaming Lips can create.

Before we get to the content of the music, we should talk about the title. It comes from an art exhibition created by Coyne himself. Coyne, for those who don’t know, is an accomplished surrealist artist who’s been exhibited all over the planet. The art was created to be – by Coyne’s standards at least – more accessible than his previous work. That tone is reflected in the music. This is a Flaming Lips album you could play to a non-fan, and find that they may actually like it.

That tone of inclusivity is set from the album’s opening track ‘We Don’t Know How And We Don’t Know Why,’ which wouldn’t sound out of place on mainstream radio – a charge you couldn’t really level at anything on the previous album. Yes, it’s psychedelic. Yes, the narration of Mick Jones and his tale of a Queen dying in the process of giving birth to her successor is decidedly odd, but the rhythm and hook are melodic and encapsulating. If there’s one thing we’ve consistently found about the Flaming Lips, it’s that they can make sad ideas sound somehow life-affirming, and this is Exhibit A.

As this is a concept album, we came into it expecting to hear the band explore different genres and variations on tempo, and we haven’t been disappointed. Despite that, certain narratives surface again and again; we deal on the seldom-explored-in-music topic of infant mortality in ‘Giant Baby,’, which contains the lament “One night, I saw your face up in the sky, in a cloud across the moon, it made me cry, I could see my mother as she died. In my head and in my hands, in the dirt and in the land, and it made me understand that life sometimes is sad”. As we’re still processing that, we’re jerked into the almost anthemic slow-rock-swagger of the absurdly titled ‘Feedaloodum-Beedle-Dot.’

It’s at this point that you’re forced to sit back and consider what genre The Flaming Lips truly belong to. While it seems like anyone with a guitar gets classed as ‘alternative rock’ these days, lumping virtually any ‘alternative rock’ band into the same category as the Flaming Lips is insulting to both bands. They’re entirely unique, and yet they’ve exhibited the same staying power as stadium-rock acts like Guns n’ Roses. Both bands have the same ‘rock’ labels placed on them, and they’ve existed side-by-side for the same duration of time, but comparing the two would be absurd. Guns n’ Roses are a rock and marketing machine, with a merchandising arm so enormous that they even have their own online slot game at Lion Wins. The idea of the Flaming Lips doing anything like that is utterly absurd; although we’d love to see Coyne invited to design such a game. We imagine it would contain reels made of song, and jackpots paid out in ennui. If he ever reads this review, we hope we’ve just given him an idea.

The album’s one constant comes in the shape of Jones, and perhaps the genius of his presence is that he doesn’t need to be there at all. Anyone could read Jones’ words, but knowing that it’s Mick Jones speaking somehow adds to the experience. We won’t spoil the experience for you, but Jones is there to connect the ideas between the songs for you, and provide some context to the lyrical and musical labyrinth. Consider him your guide in a journey to the ethereal.

If the intention of Coyne and the band was to create an album that will welcome new listeners into the Flaming Lips fandom, they’ve probably failed. Try as they might, they can’t escape who they are – a delightfully weird gang of artists who at times seem to masquerade as a band. You’re no closer to knowing what’s truly going on inside their minds at the close of the album’s last track ‘How Can a Head’ than you were at its beginning, but if you’re a fan, you’ll have enjoyed the ride nonetheless.

Regrettably, if you didn’t pick up a copy of the album on Record Store Day – when it launched with a limited run of 4,000 copies – you’ll be waiting a while. The ‘real’ release will come in July, both in physical and streaming formats. Make a note in your diaries, and clear some time to sit down once again for a date with music’s great unknowables.