Every Time I Die – From Parts Unknown 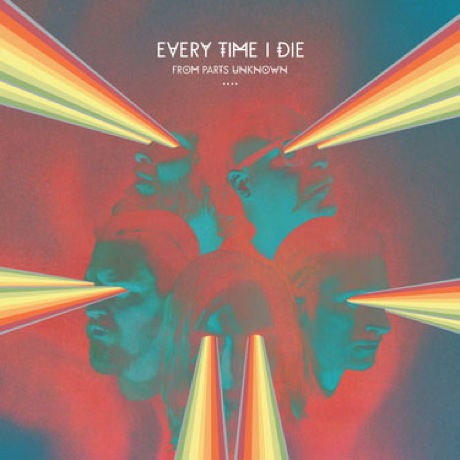 Do I really need to introduce Every Time I Die? Maybe I should, because every person who listens to them winds up with a melted face. I’m not kidding, check any comment section on any reviews of any of their albums. Anyone who has ever been to their perpetually sold-out Christmas shows knows what ETID is all about: brutal, guitar smashing, oft-hilarious dudes playing ugly chords on Lisa Frank guitars. What isn’t amazing about that?

All that aside, ETID is nothing short of legendary. Album number seven is called From Parts Unknown, and this time around, ETID have enlisted Converge guitarist Kurt Ballou as a producer.

Let me tell you something. It shows. This is ETID’s heaviest stuff yet.

Album opener “The Great Secret” was my personal favorite song, probably because it was like two minutes of getting punched in the face. I like to listen to music to relax and drown out the rest of the world… From Parts Unknown definitely helps to drown the world out. Just listen to the machine gun snares or the riff monsters otherwise known as Andy Williams and Jordan Buckley. Also, it was a “no-brainer” for me to think “blow your fucking brains out” is the coolest way to start an album ever.

Another one of my favorite songs on FPU is the (and I use this term lightly) slow-burning “Moor.” The opening piano riff is sparse and reminds me of something The Blood Brothers would have done, but the song turns into a chest-beating stomper about half way through. Singer Keith Buckley has this uncanny ability to change from a throat-shredding scream to a singing voice that is actually very pleasant. I’m not sure how he’d feel if I walked up to him and told him his voice was “very pleasant,” but there’s a reason Soul Patch is so popular in Buffalo, right? I also loved “Exometrium,” especially when Buckley screams, “did you smell a rat?”

But where FPU really shines are the ferocious blasts of two-minute sections of chaos like the Converge-like “Pelican of the Desert,” “Thirst,” and “Overstayer.” It goes without saying, but 16 years into their career, ETID have truly become kings of hardcore. The most refreshing thing about ETID is there are no cheesy electronics or anything else to bog them down. They continue to release critically-acclaimed album after album with no gimmicks… Just balls-to-the-wall, horns-in-the-air hardcore.