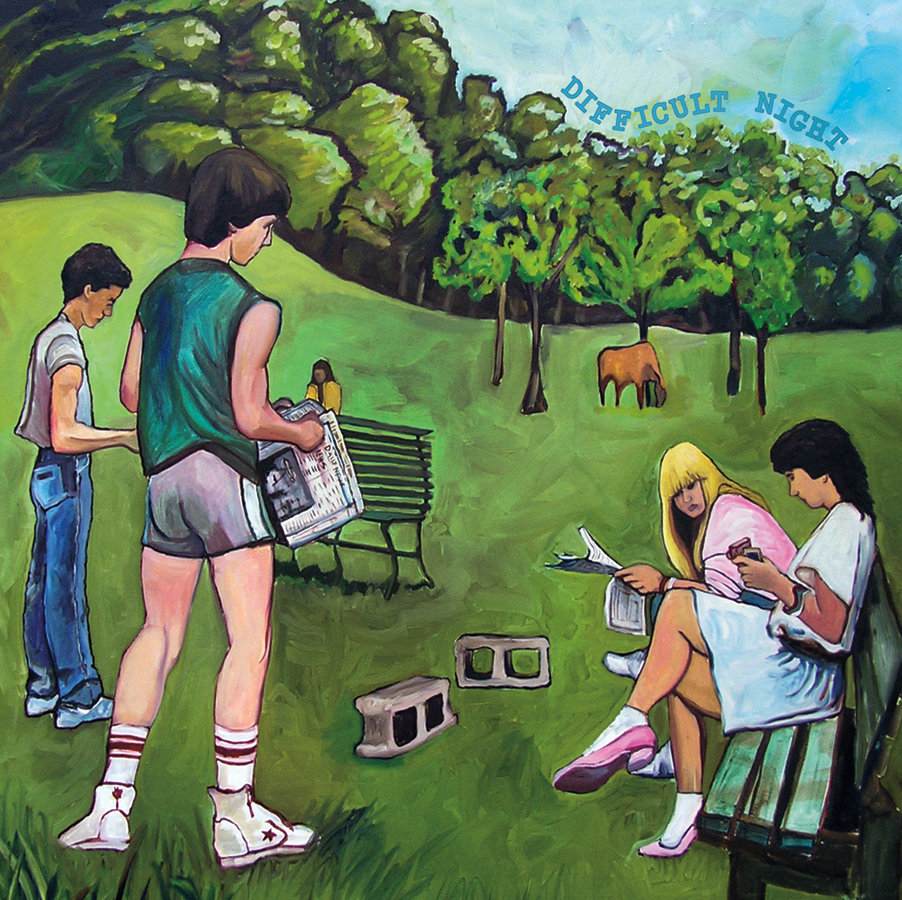 Difficult Night is somewhat of an anomaly.  An anomaly in the fact that the unique Buffalo quartet is fundamentally unclassifiable. The oft-coined “slacker rock” designation only goes so far, “indie rock” is an even broader cop out. Classifications (or lack thereof) aside, I can concretely say that the band does what they want, a project unburdened by the shackles of expectation. Their latest album, In a Blackhole at the Listening of Distant Harpers in the Dim Gloam of Evening (inhales), lays foundation on that sentiment, making the collection of songs deliciously raw and unapologetically soaked in truth.

Blackhole seems to shine brightest in its elements of observation and introspection. “I used to believe in signs / before I knew how to read ‘em,” sings Shane Meyer on midtempo number “Turn My Back,” track two of the 9-track album. Many of the songs feel like face-to-face conversations with Meyer, an unfiltered series of heart-to-hearts in which he spills some of his innermost musings about various aspects of his day to day. But the straightforwardness is strangely far from straightforward; the lyrical storytelling of Blackhole is as its title denotes—bending, turning, even a little dizzying at times.

But like The Pixies, Pavement, or perhaps Casiotone for the Painfully Alone, the neuroticism is embraced, and it’s a beautiful thing. It’s this very primal kind of accessibility that makes music like this infinitely listenable. The complementing instrumentation takes after the third of those three comparisons, songs like “Around Nine” and album opener “Blackhole” are embellished with keyboard parts that let the songs breathe, which isn’t a quality often found in the realm of synth. It’s the perfect balance of tasteful indie rock delivery and unadulterated lyrical outpouring. Nice.

You can find In a Blackhole at the Listening of Distant Harpers in the Dim Gloam of Evening awaiting your download at Difficult Night’s bandcamp page right here.