Damian – You Don’t Need It 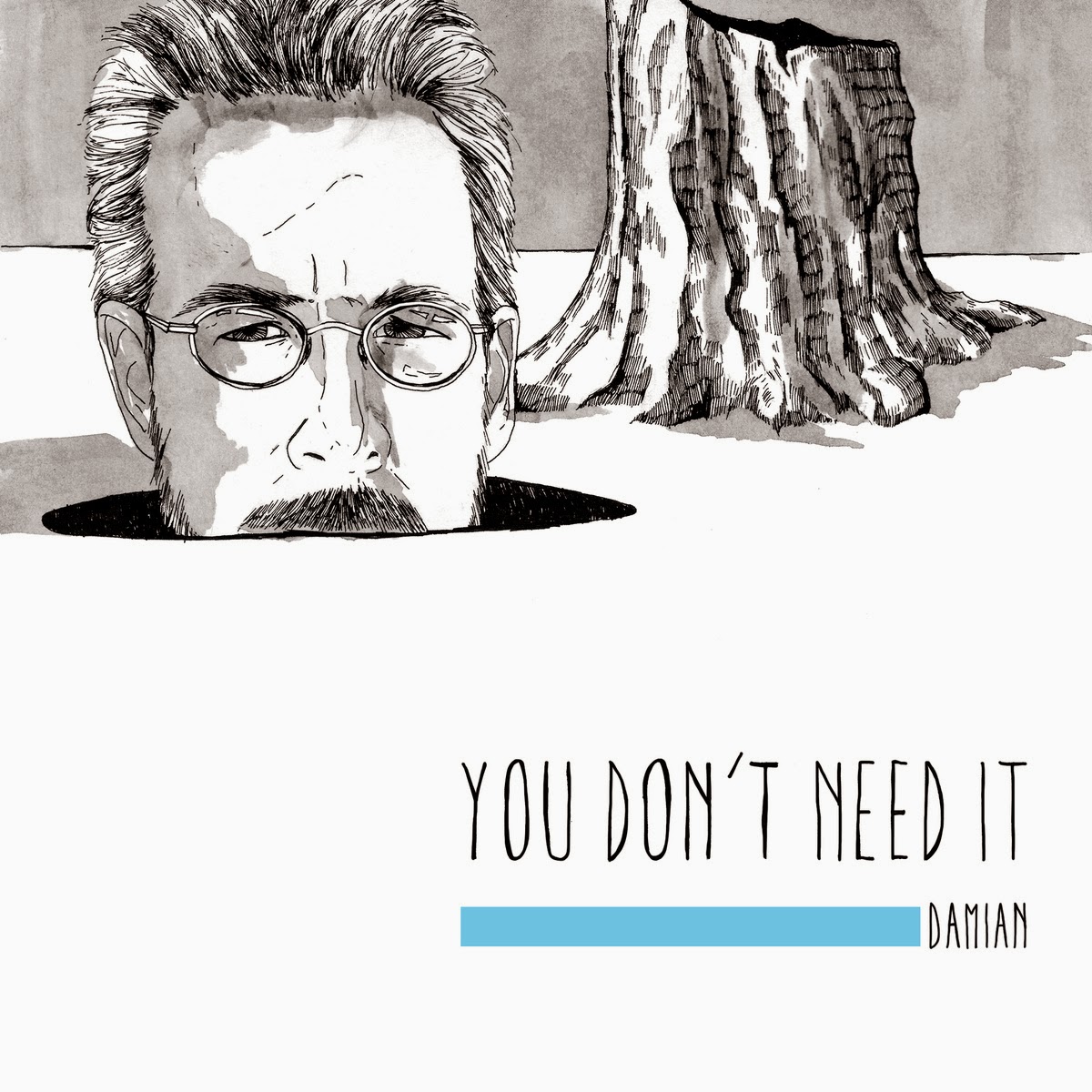 There are maybe twenty or thirty people crammed into Damian Weber’s living room. The request came from a guy standing in the doorway, but all over the room, people begin to signal their approval.

Up front, Damian Weber, bashfully charismatic, looks down at this guitar and sighs that he isn’t sure if he quite recalls how to play it. But the shouts continue, and Damian acquiesces, playing the song perfectly from start to finish. He remembers every word, and so do many of the people in his house. Camera phones come out to catch the key bits. “I can only dance if my rock ‘n roll is made by a weirdo,” he sings. Through the doorway behind him, I can see two people swing dancing through his dining room.

“Soul Night” is the title track from Damian’s debut album. This article is about his new album, You Don’t Need It. Following up Soul Night is a tall order. It’s a great record: we gave it an A, and every person I talked to about it at the show on Saturday was still kind of enamored of it. Given, they were all people who came out to a house show on a Friday night to see Damian play, along with Kim Moore and Difficult Night. But they had a reverence for Damian that surpassed merely supporting a friend.

Which makes sense. Weber and his music, for all the mumblecore understatedness, are kind of magnetic. To have thirty of your friends in your living room who know your music well-enough to shout the right words in the wrong places is a special thing. Damian himself stops and starts in the middle of songs, criticizing his performance or changing his mind about playing some altogether, but still manages to hold the room’s attention.

And, really, it’s Damian’s presence that links Soul Night and You Don’t Need It together. That sounds obvious, but the two albums are different in significant ways. Stylistically, the sound on You Don’t Need It takes a turn. Soul Night felt folkier and at times a bit dancier. You Don’t Need It, on the other hand, is mellower, more contemplative, and more produced. At its heart, it’s still a folk album, but it veers more towards indie rock, even approaching a slacker-disco vibe on songs like the opener, “Sexy Music.” And it definitely sounds like a Steak & Cake record, from the bells to the guitar tone.

Weber, though, is unmistakable, his voice especially. It’s reminiscent of Mark Kozelek of Sun Kil Moon, but with a bit more levity. I asked Alex Berkley if it would seem like a slag if I said that Damian sounds like if Kermit the Frog smoked three packs a day. He told me I should probably ask Damian’s thoughts on The Muppets before I put it in writing, but I didn’t get the chance. However silly that might sound in writing, listen to Damian sing: it’s unique, it’s sincere, and it allows him to get away with expressing a wide range of sentiments. Kozelek is out there right now mumble-singing about relatives dying in freak accidents. Damian runs the gamut, from sexiness to loss to dreams about killer bears, but none of it ever seems silly or superfluous or out of place.

“Sexy Music,” the album opener, is a good litmus test. Damian’s a lot of things, but he isn’t R. Kelly. So it’s a gutsy-but-inspired move to kick off the album with a line like “You don’t know how sexy your music is to me.” If Damian had faltered, distanced himself from the line even a little bit by delivering it with a hint of irony or humor, the whole gambit would have failed. But he plays it straight and it pays dividends. The kind of music that Damian writes lives and dies on the audience understanding that he means every word he says, one hundred percent. That goes double for the lines that come off a little strange, like when he dreams of a killer bear on “They Own Us.” But even at his weirdest, Weber comes across as totally sincere, and that’s what makes You Don’t Need It great.

Not that everything on the album is so out there. Songs like “Be My Home” are straightforward and sweet. “We’ve All Got Good Things To Do,” which borrows many of its lyrics from singer-songwriter Jeffrey Lewis’s “Alphabet,” is now my go-to song to send to any friend who feels like they’re a shitty person. And “Mercy” reminds us that “There’s mercy in the air, and when you look, there’s mercy everywhere.”

It’s worth noting that, with Damian’s delivery and lyrical skills, it would have been easy, perhaps even fashionable, for him to write songs that were real downers. Instead, You Don’t Need It is basically an inspiring, encouraging album, a testament to the goodwill and kindness of the people we surround ourselves with.

Fittingly, then, it closes with the title track, which meditates on the possibility of “starting over again with your friends.” Damian doesn’t sugarcoat things. He doesn’t pretend that building a life is by any means easy. But he does make it seem possible.

I can tell you this: at the show, Weber’s friends were definitely willing to start over with him. Sure, they knew all the words to Soul Night. But they’d started to learn the words to You Don’t Need it, too. In the middle of “They Own Us,” a guy sitting in the corner shouted the refrain a little early and someone spilled a beer and the keyboard player had to admit that he didn’t know the chords. Everyone, including Damian, had to stop for a second, take it in, and laugh.