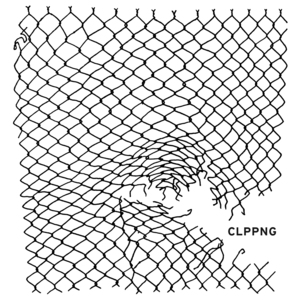 Before I start this review I just wanna touch on one thing real quick. The whole phenomenon of bands/music groups,  cutting out vowels in song/album/artist names or replacing them with Vs, is so played out. I can’t stand the name of this album, just make it a self-titled. It would’ve been cool like two years ago, but now it looks like the name of a random soundcloud artist. I digress.

Clipping. is a trio consisting of rapper Daveed Diggs, and producers Wiliam Hutson and Jonathan Snipes. Hutson and Snipes both hold industrial-electronic roots with other bands and projects, and they craft the noisey in-your-face music that the band is known for. Diggs provides the raw, violent imagery to accompany the music, and he truly is a great technical rapper. Their Facebook page sums up their sound as “music for the club you wish you hadn’t gone to, the car you don’t remember getting in, and the streets you don’t feel safe in.”

The intro is one minute of Diggs going in on an overly-abrasive “beat” of distorted high pitched frequency. That noise really makes me want to change the song every time, even though Diggs really does put together a fiery verse with a fast flow that lasts the duration of the song. I know that the whole deal is that the music is meant to make you uncomfortable, but the beat really just makes it unsalvageable.

The album moves on to the two album singles, “Body and Blood” and “Work Work.” The former is a demented chronicle of a woman who uses men for sex, and then murders them in deranged ways. The beat is a nightmarish composition of bass, electronic blips, distant snares, and power saws. It’s horrifying in the best way.

“Work Work” is the album’s lead single and probably the most accessible song on the project. It’s got a catchy, tinkering metallic beat and a funky bassline, and Digg’s subject matter is at it’s most traditional. The chorus is a play on the consistently recycled phrase “Get that work,” but it’s done well. It also features a very impressive guest verse from female emcee Cocc Pistol Cree.  She definitely takes influence from Lil Kim and Nicki Minaj (when she raps), and while it’s really just a “get money” verse, her dynamic flow stands out. Diggs’ closing verse is an imaginative account of getting pulled over by the cops, with some work in the trunk, in which he gives A, B, C, and D answers on how to handle the situation. Spoiler: D is “All of the Above.”

“Summertime” is a great song because it’s the complete opposite of what a song with that title should be. Bars in the chorus include “Cause the women so fine in the summertime, turn a 6 to a dime in the sumertime, muhfuckas still die in the summertime, it happens all the time in the summertime.” Turned a summer song into something morbid, such a clipping. move. There is also a stark contrast between the beat for the chorus and the beat for the verses, but the beats flow so well with each other that it’s like a beat is dropping every time Diggs or featured rapper King T starts their verse. It’s a cool song.

“Take In” is the first song since the intro that’s just not really working for me. There’s a machine gun-like drum that the beat is built around, and the production periodically adds in other instruments. Throwing a saxophone in on pretty industrial beat just sounded beyond out of place.

Following the pretty uneventful “Dreams” is “Get Up.” True to the track name, the backbone of this beat is the ringing of an alarm clock. After a while, the notes of the ring bounce around, and this keeps the beat from getting annoying. The music also sees a lot of expansion towards the closing of the song. which really turns the instrumental from good to great for me. The great production work from Hutson and Snipes doesn’t lose Digg’s effort, who raps with a Tech N9ne level of speed on this thing. This man can rap. Completing the song is a beautiful hook form female singer Mariel Jacoda that somehow works over this intentionally mordant beat.

Daveed takes us into the life in the trap on “Inside Out.” The beat has a sample in it that sounds like it came out of the Workaholics theme song. Following that is “Story 2,” and yeah, Diggs tells a story in it, about a father and his kids. As the beat evolves and gets faster, the rapping picks up pace as well. The final trio of songs after this aren’t really on the level of the rest of the album’s work.

Daveed Diggs doesn’t blow minds with his lyrics, but he brings energy and dexterity with his flows, that really compliment the sound that clipping. goes for. The beats are some of the most inventive and experimental that can be put under the “hip hop” umbrella. The strongest songs with the highest replay value do come at the beginning of the album, and while the bottom half of the album is still good, it doesn’t hold to the “Body and Blood”/”Work Work”/”Summertime,” trio that kicks it all off.