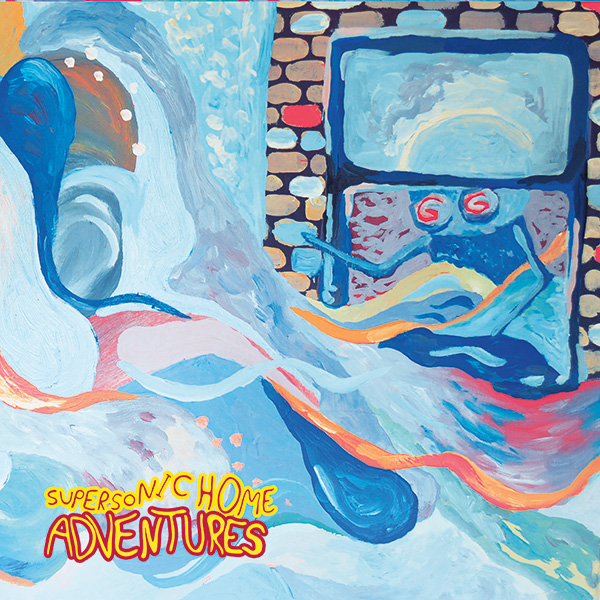 With no prior knowledge, you would probably have no idea while listening to the new Adventures album, Supersonic Home,  that this band was made up of members of the brutal hardcore punk band Code Orange. Three of the four members of Code Orange decided to ditch the heavy breakdowns and join with two friends to go for a new project, solely for the sake of having some fun. Sonically, the two projects couldn’t be more different. While this is the band’s first full length, the quartet has been releasing splits and EP’s since around 2012. With the help of Run for Cover Records,  Adventures’ first album is now available.

While the sounds that Adventures bring on Supersonic Home are nowhere near groundbreaking, the band still managed to put together a pretty solid album. The strong point of Supersonic Home is definitely the songwriting.  The hooks on almost every one of the tracks does its job to the maximum effect, and will be stuck in your head after only one or two listens. “Your Sweetness” and “Tension” in particular will have you singing along almost instantly. Moody emotions hang heavy in the lyrics on Supersonic Home that surprisingly seem to fit the instrumental energy produced by the band.

The album’s stand out track, “Your Sweetness,” features some really fitting vocal harmonies and the possibly the most memorable hook on the record (“The way things start always feel so inviting”). The track’s vocals seem to fit incredibly well with the clean, bouncy instrumentals.

While the songwriting is great, its unable to carry the whole record. Simply put, the instrumentation is just okay, adding some memorable moments to the songs at points, but overall, pretty bland. The band took very little risks despite sounding incredibly fluid and clean. I can’t help but listen to this band and draw sonic comparisons to typical indie rock sounding bands in the genre like Lemuria or Tigers Jaw.

At just over 30 minutes long, this album is the perfect length, not long enough for you to get particularly bored. The hooks are definitely able to carry the record to make an overall pleasurable listen. It will be interesting to see if the band keeps putting out new music or if this was just sort of a fun one off type project. I do hope that on the next full length, if there is one that is, that Adventures take the sound back to what was showcased on the early EPs which seemed a little more varied, both instrumentally and vocally. While Supersonic Home does sound a little bland at times, the album is still a recommended listen.