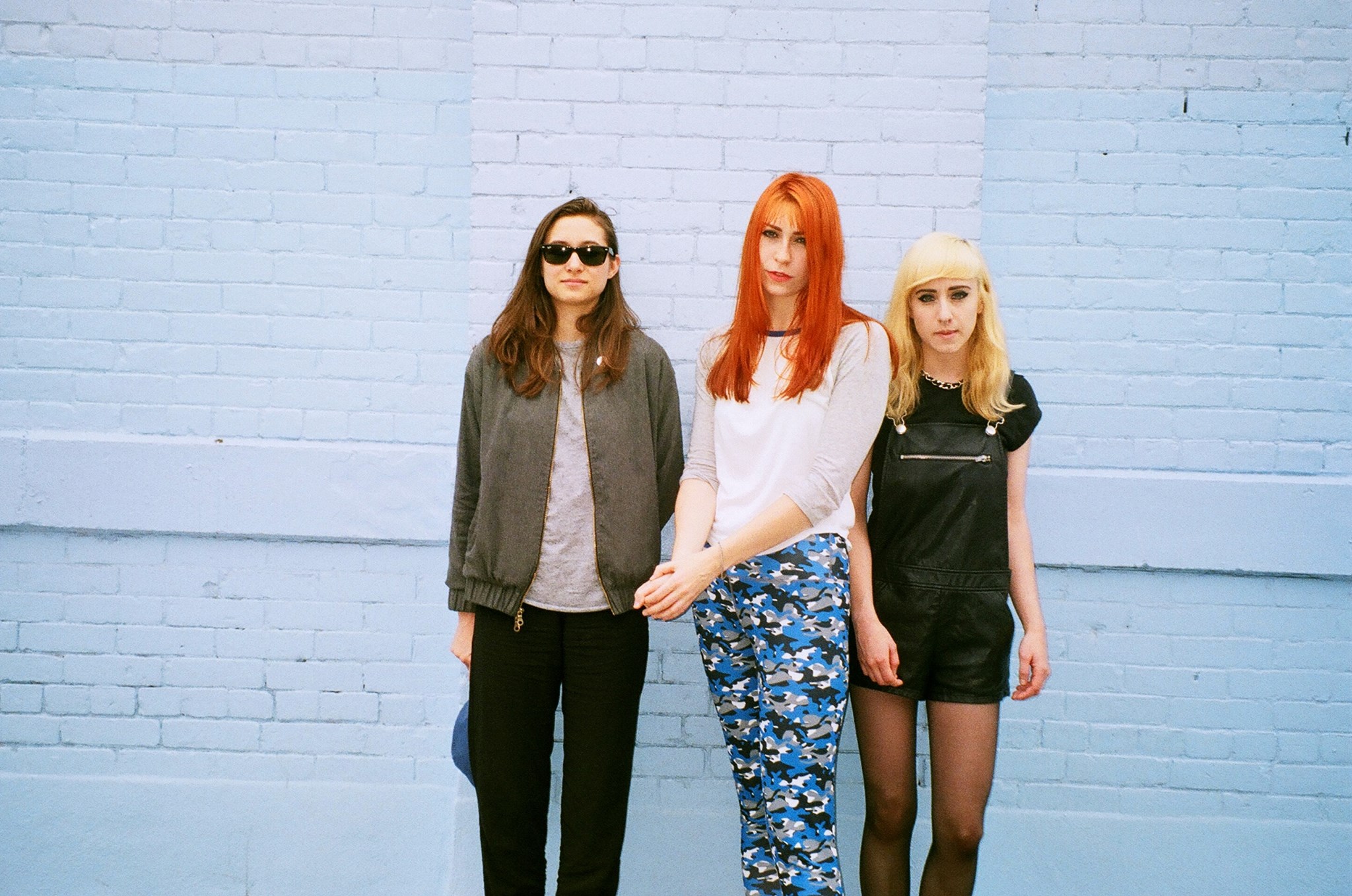 Prior to their set tonight at Mohawk Place opening for Screaming Females, we had a chance to chat with the vocalist/guitarist Abby and bassist Ally of Western Massachusetts trio, Potty Mouth. With a new self titled EP released this August, the three piece has been turning heads, and for a great reason. Their acclaimed style of 90’s tinged punk inspired pop tunes have led to the band taking one foot out of the DIY scene and reaching to bigger audiences, and with great success.  We had a chance to talk about the past, present, and future of the band, as well as essential 90’s film soundtracks.

buffaBLOG: For those unfamiliar with your band, care to give a brief history of how you all met and began making music?

Ally: We formed in 2011. I met Victoria when we were students at Smith College in Northampton, Massachusetts. We didn’t know Abby at the time, but we met her through a close friend who was also a student at Smith named Pheobe, one of our original guitarists. We knew Abby also wanted to be in a band at the time, so we all kind of got together and just practiced. We didn’t really have any goals or expectations, we just kind of wanted to jam and see how it came out. Victoria was a really good drummer and had been playing since she was a little kid, but the rest of us we fairly new to our instruments, so we wanted to do a thing where we were all figuring it out together.

bB: Listening to the Sun Damage EP, it is cool to see how far Potty Mouth has come, both lyrically and sonically. Is it more of just a natural progression, or was there a more specific reason?

Abby: It was definitely more of a natural progression. When we first started, it was a really new thing for a lot of us to be in a band and write music. Once we started to get used to it and figured out our roles and what we were doing in the band, it just sort of became obvious what kind of sound we wanted to produce and what we could produce.  It was just time and getting used to playing with each other.

bB: The production on the new EP is far more professional and clean sounding than your past records, and to great effect, it sounds awesome. How was the recording and production process different from your past releases?

Abby: This last recording was a lot more professional, I guess. Usually we just record in a local recording studio in Western Mass with our friends; its very low key. We usually just lay down a couple takes and just overdub, but this time, we went into it with really intentional sounds in mind and how we wanted everything to turn out. John Goodmanson (producer to Bikini Kill, Sleater-Kinney) was really awesome with everything in the process. We recorded in a studio that had endless amounts of gear that we could use in whatever way we wanted. John knew the gear really well, so we could just say we wanted a particular sound and he would know how to make it, so it was really awesome in that way.

bB:  What was the process behind the release of the new EP? I see on bandcamp that it says released on Whatever Planet Records, which is kind of your label, correct?

Abby: We actually had this thing set up with our distributor, ADA, and they really helped us out in making and funding the record, they were cool about us testing out our new sound.

Ally: Yeah, we had a lot of help from ADA. It’s not necessarily a true self release, where we had to find our own distributor and handle all that, but they found us and they allowed us to create our own imprint under ADA which is now Planet Whatever Records. In the future, I’d love to to releases for friends and their projects under the label as well, but for now, it’s just our thing. Also, doing it ourselves meant we just had total control over everything like the art, and things like that. We don’t have it pressed on vinyl right now, just digital and CDs that we sell while we’re on tour, but that’s fine for now.

bB: How would you compare shows you are playing now to the shows you played starting out? Are you still into playing into the more DIY ethos of punk, or do you want to be playing slightly bigger shows? I’m sure a handful of people reading this were at the show you guys played with Aye Nako in Buffalo at Ocean Garden last year, which was easily my favorite show at that venue.

Ally: Totally, it’s all about who you’re playing with and the kind of crowd you’re playing for. We’ve played lots of bigger shows that are at legit venues, but we’ve also played some not so great shows at legit venues. I think that house shows and DIY shows are always going to feel really fun, there’s something kind of amazing about the whole idea of DIY and that there’s this self sustaining and internationally standing network of people that put on their own shows and tours. That’s how we started doing things, so we definitely feel an affinity for that.

This is something we have been talking about recently, like how to grow as a band but keep one foot within the DIY world and still play those shows. Not that money is everything, but sometimes those shows can even be more profitable in a given city, like if the packet of punk kids organizing shows in that particular place know what they’re doing more than a promoter at whatever venue, then you could be playing a DIY show to a bigger audience than a conventional pay-to-get-in audience.

bB: Are there any bands from your hometown that you recommend checking out? Any bands nationally that you love playing with or you think people should be checking out?

Abby: When we were in Oakland, we played with this band called Never Young that were really good.

Ally: We went on a tour with Aye Nako last year and they’re still our very good friends and they’re always really fun to play with. We play with them in Brooklyn on this tour, so I’m really excited for that lineup. Another band that I love and are great friends of ours, who also have an album coming out this month, is Stove. It’s our friend Steve from the band Ovlov, and they got together when Ovlov broke up, and we’re really excited for their record coming out this month.  Also Speedy Ortiz. Sadie lives in this area and we always love seeing them. Downtown Boys are also great; we played an amazing show with them at CMJ this year at a car wash with some of the best bands around right now like LVL Up, Sheer Mag, Perfect Pussy, Protomartyr. That was an amazing lineup.

bB: To me, the new self titled EP screams 90’s movie soundtrack. If you had to pick a favorite 90’s movie, what would it be? If you could replace any movie with your songs, what movie would you chose?

Abby: One persona actually told us that some of our songs reminded them about The Ten Things I Hate About You soundtrack, but I guess Empire Records, because that feels more relevant to music.

Ally: Yeah, Empire Records is definitely a good one. It’s weird to say this, but some of the old Mary Kate and Ashley movies from when they were little kids are corny but actually have super good soundtracks with some pretty obscure 90’s bands.

bB: What’s the deal with the dog on the cover of the new EP? I’ve seen it on your merch designs too, and I just had to ask.

Abby: Yeah, we’ve always just had a dog as our logo. We had a different sketch of a dog on our old merch too, and it’s just sort of like our thing, kind of like the theme of our merch. We have a song called “Dog Song” which is about being a dog, so it kind of came from that and has been our theme throughout the band’s history. The new, reinvented version of our old logo.

bB:  If you had to pick four modern bands for your dream lineup, who would you chose?

Abby: This is really difficult. I haven’t seen Bully or Dilly Dally, and I really want to see both those bands. Can you think of anything Ally?

Ally: When we played those shows with Joanna Hatfield Three, I felt like I could see them play every night, and not really get sick of it. Also, I feel kind of weird saying this, but I guess the Lemonheads because they are one of my favorite bands, but I have never ever seen them live before and I have had the opportunity to but have always missed them. Through playing shows with Joanna Hatfield, we met Evan Dando and it’s weird to know this person and I’ve never seen his band before which I love SO much, so I definitely, definitely would want to see them.

bB: To end this, if your band had/has a motto, what would it be/what is it?

Abby: My motto is “You have to give a shit to get shit done.”

Catch Potty Mouth at Mohawk Place tonight opening for Screaming Females. Tickets are only $14 dollars at the door, and things are set to take off at 8pm.