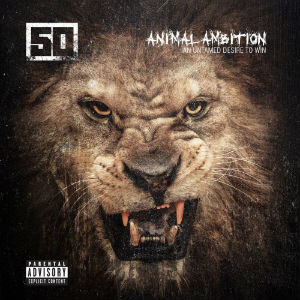 Animal Ambition works when 50 Cent understands that he’s worth 140 millions dollars. Sometimes 50 gets caught up with his life back when he was fresh off of being shot 9 times, straight off of the streets, and all the other details that made him one of the best crossover gangsta rappers of all time. Now though, 50 hasn’t been on the streets for a long time. In the same way that Jay-Z still gets grief for his coke selling subject matter 20 years after the fact, 50’s strengths and weaknesses are on this album are dependent on whether he’s living in the past or the present.

In “Hold On,” we see 50 attempt one of his sing-songy catchy hooks that took him to the top of the music industry 11 years ago. It’s not going to be the last time he does it on this album, and it’s probably one of his better attempts. Producer Frank Dukes lays down a really smooth electric guitar instrumental similar to something Dre did on 2001, and 50 brought some of his most impressive bars to rap over it, like “Strap under my pillow, I done went legit, I ain’t supposed to do this shit, but I forget.” Here is a song where 50 touches on where he came from, while understanding his current position.

“Dont’ Worry Bout It” gets a feature from Yo Gotti, and it’s a pretty forgettable song right away. I’ve never been a huge Yo Gotti guy, but I have an open mind. The line “Talking down on n****, that’s how you get a hater charge,” really lost him for me forever. Hooks have always been 50’s strength. “21 Questions,” “Candy Shop,” Hate It Or Love It,” “Window Shopper,” “In Da Club,” the list of infectious choruses goes on and on. The vibe I get on this project is that he’s trying a little too hard to emulate those hits. Nearly every song has one of these choruses.

“Animal Ambition” is definitely a step up from that, and it’s a really groovy instrumental, with some cool jungle drums and horns. There’s also that plucked guitar that again sounds like something Dre perfected. The beat is by Swiff D, making it the third straight producer that I’ve never heard of, which is pretty weird for a comeback album from a guy that used to be on top of the world.

The Dre (supposedly) produced “Smoke,” is a pretty generic attempt at a crossover rap hit. Dr. Dre’s contribution is one of the worst beats I’ve ever heard from him. This is a guy that sonically redefined the genre, and now he’s making  forgettable beats that have Trey Songz on them. He must be too caught up in the Beats empire.

“Everytime I Come Around” is another attempt by 50 to sing a hook that will become a classic. The magic just isn’t there. Kidd Kidd actually comes through with a solid guest verse. He goes with a triplette flow with no breaths for his quick feature, a rather impressive piece of technical rapping. That’s the only real notable thing about this track.

“Irregular Heartbeat,” featuring Jadakiss and Kidd Kidd is one of the best tracks on the album. The minimal, muted beat really suits Jada. “Social Media’s giving cowards an outlet, see them in person and they say something? I doubt that,” is such an OG bar from him, as his verse really highlights the song.

“Hustler” is the first time that 50’s melodic hook sounded really good here, and his bars are at their most polished here too. Businessman 50 takes over the track on the second verse, as he opens it up with “Get on my level bitch, I’m careful who I kick it with. We talk market and distribution and politics.” Here I saw one of the most noticeable transitions between 50 Cent of 2003 and 50 Cent of 2014.

This is an album that 50 wanted to make for his audience at his peak, but now his fans are sparse, so it doesn’t really work. It doesn’t come close to Get Rich or Die Tryin’ or The Massacre, but no one really expected it too. There are a handful of solid tracks, like the opener “Hold On,” and “Hustler,” and a couple others, but most of the tracks aren’t worth mentioning. Get Rich Or Die Tryin’  sold 872,000 copies first week. Animal Ambition is predicted to sell about 35,000 copies first week. There is a reason for this, and it’s not just 50’s diminished popularity. 50 lost his magic stick.