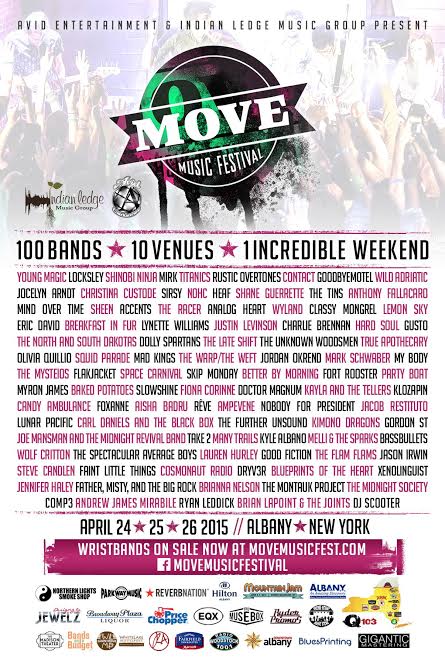 One of the goals we have as a blog is to expand our regional/state-wide influence/knowledge base. Once we received an e-mail from Move Music Festival, a three day festival taking place in the heart of Albany, NY, we knew we had to check out. Over 100 bands were announced as part of the festival, and trust me when we say we did our homework. Over the past week we listened to probably about 96 acts that we’ve never heard of before.

Bands like Sheen and CONTACT were impossible to google so I have no idea what they sound like. Other bands totally disappeared from the lineup (C’mon Dead Leaf Echo, I was looking forward to catching your first show since I was super poor living in NYC and eating the complimentary apps as dinner at someone’s art show in Williamsburg). The following are 17 acts we are personally excited to check out this weekend, but there are many many more quality bands/solo artists/musicians worthy of catching at Move Music Festival.

Olivia Quillio was the first band that jumped out after my initial research. The 24-year-old Albany-based singer-songwriter writes sweet alt-country laced with jazzy vocals. Fans of Angel Olsen, pre-Orange is the New Black Regina Spektor, and Waxahatchee would enjoy Olivia Quillio.

The first thing that really stuck out to me with Accents was their signing to emo heavyweights Deep Elm. 2001-2004 Michael Moretti probably spent fifty dollars on Deep Elm affiliated products. Is there going to be an Imbroco followup? Please? Anyways, Albany-based quartet Accents are playing Friday night at the Hollow, where they will be bringing their charming indie-folk group-vocals which will appease to both those who like Edward Sharp and the Magnetic Zeros, fun., and people who have figured out how to navigate AbsolutePunk.net.

Poughkeepsie-based quartet The Warp / The Weft sound like a mix of a Wild Beasts and a gaelic Tracy Chapman. I mean that in the best way possible. This band’s sophisticated champber-pop leanings  with lead-singer Shane Murphy’s incredibly powerful vocals make this a band you definitely do not want to miss (unless you are going to Accents, then it’s okay I guess).

East Chatham’s Many Trails starts off a long Saturday for anyone who has passes to Move Music Festival. If you are reading this from Buffalo, Many Trails backwoods campfire story-telling style could very well be on Harvest Sum Records, reminding me a lot of a mix between Roger Bryan and the Orphans with Hussalonia. If you have no idea what that means, Many Trails is a folk-y rock band that would appeal to fans of Wye Oak, Okkervil River, and early Wilco.

I had the pleasure of catching KLOZAPIN a couple weeks back at Albany’s alt-iest venue, The Low Beat. What stands out the most about this trio is their raw at-heart indie-punk songs and ability to really make a Sunday night feel like a Friday, or at least Thursday. The band’s sound could be described as ghostly indie rock, lo-fi weirdo punk, underwater psych pop. Regardless on wordy classifications, KLOZAPIN is an impressive young tour-warrior band from Oneonta that fans of Ariel Pink, Mac Demarco, and Built to Spill would totally dig.

Foxanne was one of the first names that popped out to me when pitching this article with my editor. “Who is playing?” “Oh you know, Locksley, The Tins, Foxanne…” To be honest, I had no idea who Foxanne was before diving into this article, but I’m glad I did. Foxanne is, by their own accord, “indie pop group with a raw dynamic sound,” which is probably what I would have strung together after a couple attempts. Fans of Warpaint, Braids, or Gwen Stefani if she was born in the 90’s would enjoy.

Slowshine is band that I had seen a lot on flyers, but never really associated a sound with a name. The band is an Albany-based quartet that pumps out shoegazey goth jams on par with The Twilight Sad,  A Place to Bury Strangers, and a sedated Pity Sex. After listening to their White Lexus EP, the name makes a bit more sense– syrupy, droning riffs accented with watery leads leave little to be desired if you’re a fan of quality shoegaze.

Mind Over Time is the name of NYC-based rock band as well as a mediocre song off of Interpol’s 2007 album, Our Love To Admire. Luckily, the band is better than the song. Mind Over Time’s sound is similar to We Were Promised Jet Packs, Frightened Rabbit, or The Editors.

Going into this, Breakfast in Fur was another band I was slightly aware of due to a past article I perused regarding the top Hudson Valley bands to check out. The New Paltz-based psych-pop act’s material is often covered by the major indie music outlets (Pitchfork, Allmusic). Signed to Bar/None Records, Breakfast in Fur’s sound would appeal to Alvvways, Pains of Being Pure at Heart, and The Sleepy Jackson.

(RÉVE IS NO LONGER PLAYING) Baltimore’s avant-garde art rock band, RÉVE, is a band that I hope no one asks me to pronounce. Reevee? Not sure. Regardless of me having to copy and paste RÉVE’s name repeatedly throughout this paragraph because I have no idea how to accent, the band’s sound is impressive, similar to that of Mew, Mutemath, or even Asobi Seksu.

Aisha Badru is one of those artists that mesmerized me into listening to her full EP without even noticing it.  She should be on every romantic comedy and playing over the speakers in every Starbucks; I wouldn’t be surprised if it happens soon. Fans of Lykke Li,  Feist, and Frou Frou would love this probably as much as I do.  Aisha Badru is absolutely fantastic.

After a successful Kickstarter fundraiser last weekend, The Tins are back to doing their thing. Arguably one of the most popular Buffalo-based bands in the scene, the electro-pop trio will be making the grueling four and a half hour drive east to deliver songs that will undoubtedly stay in your head throughout the night and into Sunday. Fans of Joywave, MGMT, or Capital Cities should make their way over to the Stout Tent.

Kimono Dragons are a band that need to be on the next Buffalo basement show put together by Rick Reynolds. The band would fit perfectly on a show with Aaron & the Burrs, The Hamiltones, Televisionairies, and even Harmonica Lewinski. For those who don’t get the reference, it’s sweet surf-instrumentals with indie-pop stylings.

Party Boat are a sunny powerpop quartet repping the sleepy beach town of Saratoga Springs (but currently residing a little more inland, Troy). Fans of Smith Westerns, The Soft Pack, or Dent May would dig.

Titanics are probably Albany’s most popular up-and-coming band. Since 2012, the duo has been gaining quite the buzz beyond the 518, getting numerous writeups on legit mediums as well as playing shows with Portugal. The Man and MS MR. This might be one of the last times being able to catch Titanics in a small venue, so I would strike while the iron is hot. Fans of Youth Lagoon, Poolside, or Stepdad would dig Titanics.

New York-based four-piece Locksley are the grizzled vets on this lineup. They’ve been around for over ten years and have had a significant slot on at least two of my lost iPods. Their songs are full of peppy gang choruses backed with the garage rock backings that fans of The Hives, OK GO, and The Kooks would enjoy.

Young Magic was my “got dam” moment when I listened to the close to hundred of bands playing. Signed to Car Park Records in 2012, Young Magic are a Brooklyn-based futurepop act that will definitely reinvigorate your love for music, even if you have stood through a dozen bands in the past 24 hours. Fans of Purity Ring, The Knife, or Crystal Castles would be into Young Magic.