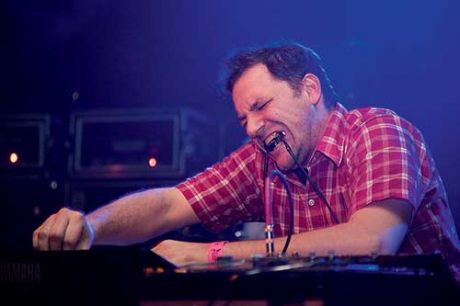 Michigan-born experimental artist Aaron Dilloway is best known as a former core member of Detroit industrial noise band Wolf Eyes, whose prolific, DIY-style stream of releases has amassed over one hundred recordings since 1996. Band members John Olson, Nate Young, and Dilloway each have been responsible for a handful of side-projects and recording aliases which have acted as a natural sonic extension of their ambitious, murky aesthetic.

On his acclaimed 2012 LP Modern Jester, Dilloway presented a comprehensive look at the artist’s avant-garde explorations that helped define the American noise scene. Despite the challenging nature of this abrasive style, the resulting effect of the artist’s chaotic soundscapes comes off as atmospheric and at times manages to achieve a serene quality amidst this highly-textured sound.

Tonight, Aaron Dilloway will be performing at Buffalo’s Squeaky Wheel Film and Media Arts Center along with an opening set from Mistake by the Lake Tapes artist Andrew Kirschner. Doors open at 6:30pm with the performance starting at 7pm. Tickets are $7 for general public and free for Squeaky Wheel members.