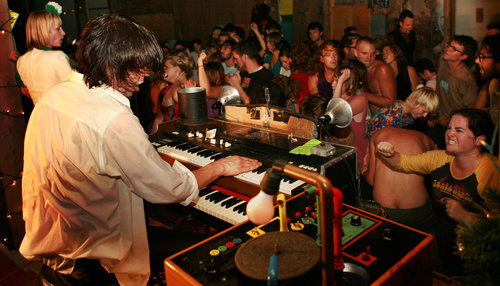 Hopefully they grabbed a couple parkas before hitting the road because New Orleans based act, Quintron and Miss Pussycat, will be dropping down on the winter wonderland that is Buffalo tonight. Made up of long time electronic musician, Quintron, and puppeteer (yep), Miss Pussycat, the pair have coined the term, “Swamp Tech,” a chaotic version of electronic dance music bred in the deep south for nearly 15 years. They even popped up on an episode of Treme, HBO’s love letter to the Crescent City’s eclectic neighborhood, a couple years back.

Originally scheduled for Buffalo Iron Works, this show will now be taking place at the comfier confines of Mohawk Place. Buffalo punk-funk all-stars, Mallwalkers, the Queen City Lotto product, Scajaquada Creeps, are set to open. If you want to see something out there, fun, and original, this is the show for you. Plus, the city barely got hit with snow, so no excuses for not making it out tonight.

You can grab tickets at the door for $13. Music starts around 8pm.