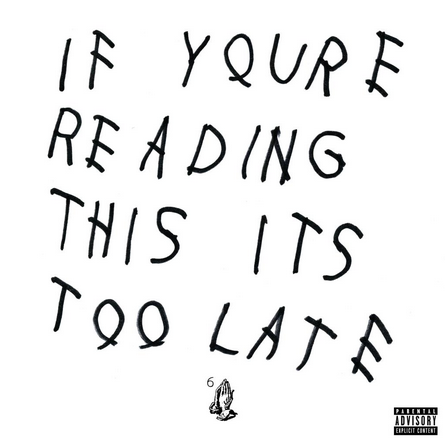 Friday the 13th, February of 2015. A day that will live in Drakefamy. It was just yesterday that we were all wondering what rap superstar Aubrey “Drake” Graham was cooking up. Early in the day, he dropped “Jungle,” something of a promo video of him walking around his hometown of Toronto, and rumors of a mixtape had been swirling since Drake became increasingly active in recent months. And at about midnight, the hype came to fruition with the release of If You’re Reading This It’s Too Late. Always savvy, Drake went over all of our heads and dropped a full album on iTunes!

Surprise albums have been all the rage in hip hop-RnB in the last few years, most notably starting when Jay Z announced during June’s 2013 NBA Finals that he was dropping Magna Carta Holy Grail on the 4th of July. That commercial, with all of it’s Rick Rubin-y goodness, blew up the Twittersphere, and started a phenomenon that we saw somewhat emulated by J. Cole with 2014 Forest Hills Drive earlier this year, and most notably when Beyoncé dropped her self-titled truly out of nowhere last December. Drake made the move last night, though it came with some singles ahead of it. We knew Drake was up to something, but an album was not it.

It would seem as though Drake planned to release this on a noteworthy date like a Friday the 13th ahead of time, and while that is most-likely certainly true, the conspiracy theorist in me thinks that the timing of this was calculated for an entirely different reason. It was just three days that Drake’s only generational contemporary Kendrick Lamar dropped a new single, “The Blacker the Berry,” and had rap fans rejoicing. Earlier in the week, Kendrick also took home a couple hip hop Grammy’s.  Was Drake making sure that he didn’t slip in the rap power rankings for a short time?

Kanye will never fall out of the public eye, a legend still pumping out some of his best material. This week was his latest Grammy scandal, when he ripped Beck’s album while favoring the very Beyonce album that Drake’s release was seemingly was most influenced by. Kanye also performed the debut song off of his upcoming project in a concert yesterday. His relevance as as high as it’s been in a long time.

Obviously Drake had completed this album before this week, but it’s entirely possible that he saw all the news in hip hop this week and felt appropriate to move up IYRTITL’s (Is this abbreviation a thing?) release date.

Drake has made all the right moves so far in his career. Just seven or eight years in, Drake has had a record 72+ songs in the Hot 100, more than even the Beatles. All the while, he’s released projects that were both popular and acclaimed. It’s too early to give If You’re Reading This It’s Too Late an honest review, but early listens lead me to feel it’s more of the quality material that we’ve grown to expect from Drake, and there’s projections that it’ll move a very high 500k first week. On opening track “Legend,” Drake raps a declarative, swanky chorus, “Oh my god, if I die I’m a legend.” Looking at his achievements thus far, it’s hard to argue. Last night, Drake reminded us that he still rules the hip hop world for the foreseeable future, even in the face of big weeks from some of raps biggest names.

Check out “6 God” by Drizzy below.