De La Soul – and the Anonymous Nobody… 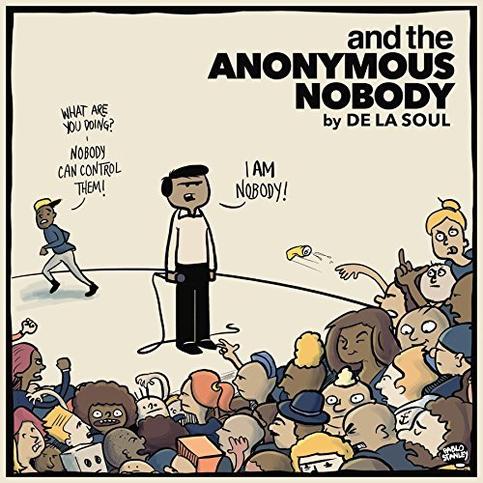 It isn’t easy being De La Soul. Almost from the start, the struggle has been real for the Long Island trio: instead of enjoying immediate cultural impact of their debut album Three Feet High And Rising and it’s idiosyncratic and irreverently funny explorations of hip hop and it’s possibilities, they got to be sued over a sample not even used in a hit song by the utterly forgotten original artist (Flo and Eddy?). They refused to be pigeonholed by fans and critics, confounding both on subsequent albums De La Soul Is Dead and Buhloon Mind State, and have seen their whole catalog get trapped in legal and record label Hell. After all this there was much rejoicing when the band announced that they were working a new album, their first in eleven years, and more when it arrived last week.

Made possible by a resoundingly successful Kickstarter/Go Fund Me/whatever campaign, and the Anonymous Nobody by De La Soul finds Pos, Dave and Maseo unencumbered by record labels, the goddamned lawyers, and our expectations… and the results are downright exuberant. Keeping the samples to a minimum in favor of live beats and instrumentation by the Rhythm Roots All Stars, De La Soul’s ninth album finds the band in a liberated and fearless state of mind in the mood to bend genres, and hosting a slate of guest stars that’s bold as hell as well as fun.

Whether it’s Jill Scott channeling Odetta on the album opener “Genesis,” Snoop Dogg kicking it out on “Pain” over tight George Clinton worthy grooves, or Damon Albarn getting epic on the penultimate cut “Here In After,” nobody’s overshadowing De La. The only guest who comes close is Estelle, whose smoldering vocals on “In Memory Of Us” (also featuring Pete Rock) goes right at the sweet spot. Left field guest spots like Justin Hawkins (from The Darkness) on the ironic 80’s flavored rock out “Lord Intended” and David Byrne on the art rocker “Snoopies” work perfectly, shaking the album up while finding new avenues for De La Soul to explore their ever evolving art.

De La even finds time to give Usher’s career a needed kick and some artistic credibility on the minimalist electronic r&b slow burner “Greyhound,” before going all in on the spaced out and esoteric weirdness of “Drawn” with Little Dragon and the dirty southern styled “Whoodeeni” with 2Chainz, in fact overshadowing him with their legendary flow. This is not to say that the guest star free cuts don’t rate: “Royalty Capes” is a deliciously fat bottomed jazz joint that’s all about perseverance and pride, and “Nosed Up” is a funked up ode to weed and P-Funk’s Sir Nose. “Trainwreck,” definitely one of the album’s peaks, is a classic De La Soul cautionary tale riding over an elastic, infectious bass line and JB horns.

Ending Anonymous fittingly with the pastoral and joyful “Exodus,” an encouraging exhortation to stay true to yourself and your friends, challenge the status quo, and to create, De La Soul remind all of us that they’re not heroes, just three cats doing their thing after all these years, and trying to contribute to culture and society, which in the end is what it’s really all about for all of us.