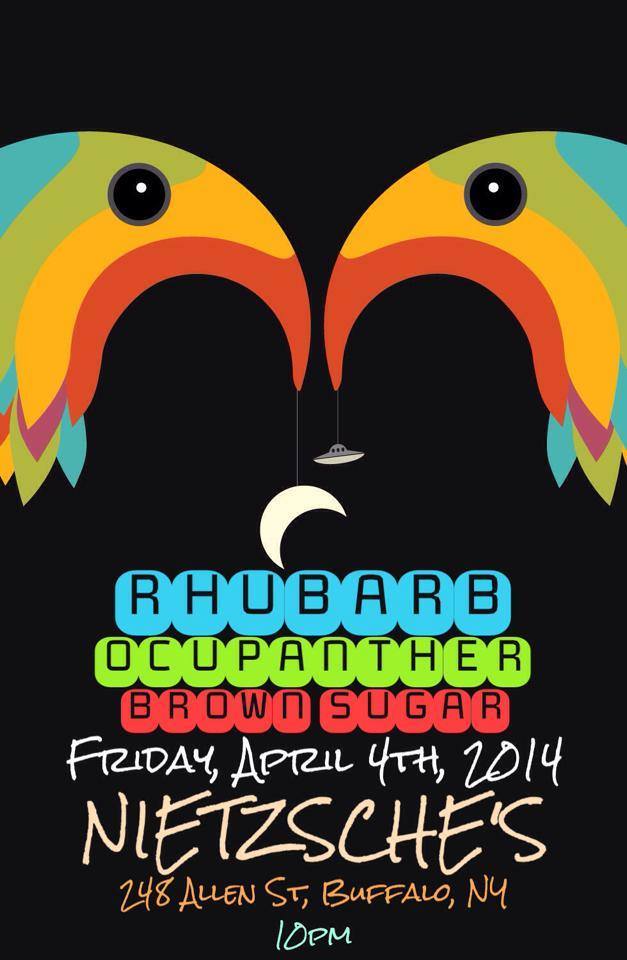 We have a triple threat on our hands tonight. Each act offers a mind-bending exploration of sound, that is, if you choose to let go. Think of them as a triple-layer popsicle–flavors blending and melting together, yet distinguishable by taste and age.

First on the roster is Buffalo-born Rhubarb, formed in the late 1990’s when trapper keepers were in the limelight and we prepared for epic millennium celebrations around the globe. Perhaps this pivotal timing had something to do with their sound. It’s not the over-saturated and aimless wanderings most ‘psychedelic’ music cares to label itself. Rhubarb clearly takes its roots from a jazz-standpoint, like Medeski, Martin, & Wood, slowly carving out a sensual rhythm and twisting the beat into a delightful daydream, steady on percussive leads.

Next in line is Rochester-based Ocupanther, who take their name from a mythical Ocular Panther who gains control of a soul through hypnotic eye contact. This is an appropriate naming for the ensnaring quartet. With the addition of synthesizer, their sound creates an atmospheric, engulfing presence. They repeat phrases in order to build and release tension, that will make you realize you’ve been standing in a type of paralysis for twenty minutes.

The final act on the bill is another local act Brown Sugar, a group in their infancy, but don’t let that fool you. For how quickly and organically the band was formed, these guys have skill. Recently they opened at Aqueous’ final residency show, and this will be their second return to Nietzche’s. You won’t be able to find any samples of their work, but let’s say it’s sly, sexy, and full of funk.

Be ready to take it to the next level with a simple flick of a five dolla bill. 10 p.m.