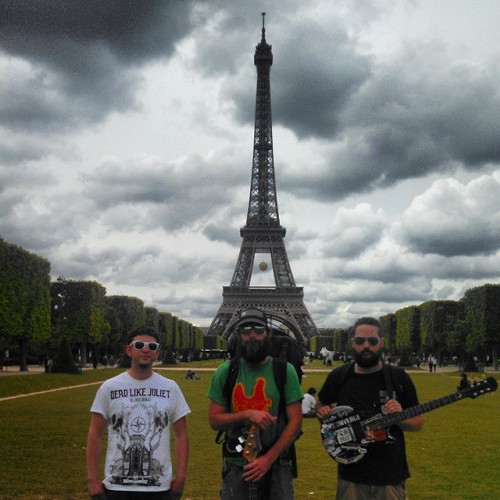 The life of a small venue booking agent can be a trying one at best. You book the show and promote the show. If there’s a low turnout, you foot the bill, and you have to deal with your neighbors and the local authorities accusing you of harboring terrorist. The latter was the real life of St. Petersburg, FL booking agent and promoter, Kat Lynes. On Sunday June 29th, a concerned neighbor of Lynes’, Keith Coleman, called the police after he saw what he considered to be suspicious individuals, three men and three girls coming out of Lynes’ apartment.

The ‘nefarious’ looking individuals were members of Nevada punk band, Vampirates. They had played a show at St. Petersburg’s Fubar the night before, a venue Lynes books shows at regularly. As per their agreement, Lynes had supplied them lodging at her apartment. Coleman had mistakenly had thought he had seen a bushy bearded Middle Eastern looking man carrying out a box labeled explosives, which actually was labeled, ‘do not expose to direct sunlight’, as it contained vinyl records.

Thirty minutes after the band had left Lynes’ apartment, the St. Petersburg police arrived at Lynes door step, responding to Coleman’s complaint. Lynes says, “At first they asked if I had people over the night before, and of course I said yes. They asked me to describe who I had over, then they asked about their van. Next thing I know, more cops come up and started asking a bunch of seriously detailed questions, like last names of everyone who was there. They wanted phone numbers, where they were going. They finally told me what was going on, with the ‘terrorist assumptions.’ I was completely in shock,” she explains. “They asked if they could look around my apartment, and of course I said yes. I couldn’t imagine how much worse I would look if I told them to get a warrant.”

After it finally sunk in that Lynes was telling the truth, the police then sat outside of her home for two hours while she put her apartment back together. This little ‘interaction’ doesn’t seem to have Lynes down however, she says “I’m not mad about it, just, still dumbfounded I guess. I’m glad to see that they [the cops] do take things like this seriously, but a 30 second walk in my apartment, with all of the posters of shows I have done, the beer bottles in the kitchen, would have been enough evidence that I was nothing more than an obnoxious downtown promoter.”