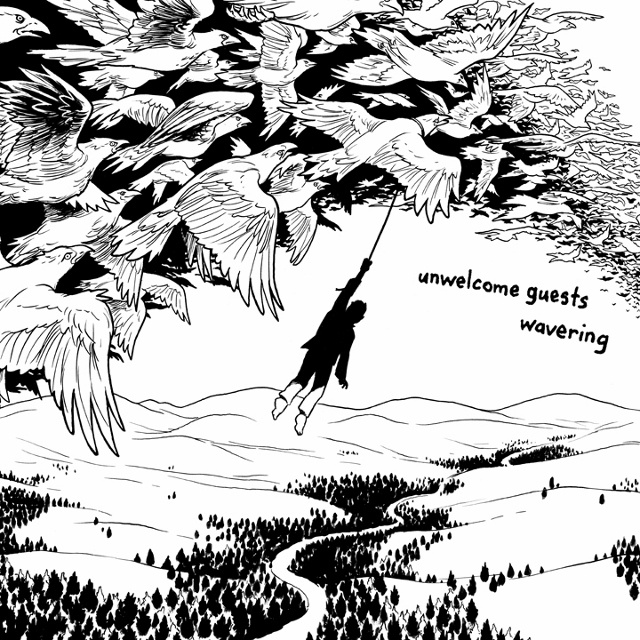 Scrolling back through our past posts on local favorites Unwelcome Guests, it’s hard not to notice a recurring theme: nobody is quite sure how to place them. On the surface, it seems like it shouldn’t be so hard. Guitars, bass, drums, vocals: this is the stuff of bands since Buddy Holly. But where one person hears the Buzzcocks, another hears the Gin Blossoms. Personally, the first thing I thought when I started listening to their new album, Wavering, was Jawbreaker, and even then, I’m not sure exactly why. Whatever the reason, Unwelcome Guests are the musical equivalent of that thing from Harry Potter that shows you whatever you want to see.

This is a good thing. It makes Wavering one of those rare albums that could, potentially, please everybody, at least everybody into rock music (Luke Bryan fans, go home). It mostly sheds the occasional country vibe found on Unwelcome Guests’ first full-length, Don’t Go Swimming, doubling down on the punk and the rock.

Unwelcome Guests have always been skilled songwriters and arrangers. On Don’t Go Swimming, it’s obvious that a great deal of thought went in to every single note, build-up and breakdown. But Wavering is on a whole new level. For one thing, the band is tighter than ever, and not afraid to showcase their musicianship when the situation calls for it. For another, it’s clear that every single track was meticulously planned and executed so that the listener would never have the chance to get bored. Unwelcome Guests put the work in on Wavering, and it shows. Where other bands might have taken one good idea and tried to stretch it across an entire song, Unwelcome Guests give every flourish the attention it deserves before moving right on to the next one. Not only does that keep the listening experience fresh, but it rewards repeat listening as well.

The album opener, “Aerostatic,” kicks off with a snare hit right to your skull, the kind designed to get an audience out of their heads and onto their feet. “Aerostatic,” and two tracks that immediately follow, “Everything New” and “Clouds,” are both melodic punk songs in the vein of great bands like Jawbreaker and Hüsker Dü. “Kick The Beams” sports some of the best guitar work on the album, building on an imperial-sounding guitar line reminiscent of bands like Ozma or Queen. Album midpoint “Flood” sees the band touching on their country-punk roots, but the tracks that follow are closer to straight-up riffy rock. “Cautions Will Be The Death Of Me” is a catchy love song, but maybe the album’s low point (or maybe I’m just a cold, cold bastard who can’t get down with sincere expressions of adoration and appreciation). But things pick up quick, closing out with the energetic, Superchunky sounds of “Can’t Get Past” and “Slippery Strings.”

Despite the fact that Unwelcome Guests draws on and displays influences from a ton of different bands, the production on Wavering keeps things consistent. No matter what great bands might come to mind throughout, Unwelcome Guests always sound like themselves, first and foremost. The album was recorded and mixed all over, including The Slave Pit, home of Gwar, and it sounds great.

Unwelcome Guests are out on tour in support of Wavering, right now, so it might be a while before you can catch them live and pick up a copy at a show. They just finished up a string of dates with labelmates Sundowners, the last one being a spot on the Dirt Cult Records showcase at SXSW on Saturday. So if you’d like a real live physical copy of Wavering, support your local record store (I know that Black Dots has it, and that Spiral Scratch should soon), or order a copy straight from the label here.