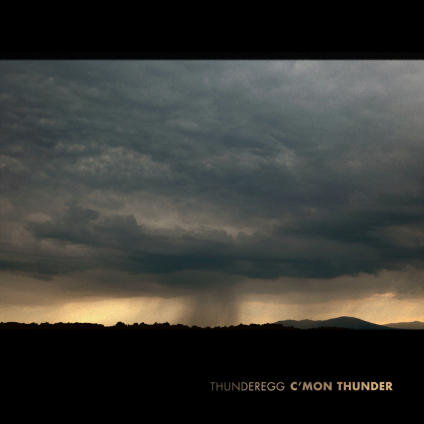 C’mon Thunder, the new release from San Francisco’s Thunderegg, is the album we just might deserve. Full of lyrical real life experiences, as in the way they actually happen and not the way we thought they would happen, sometimes a creative licence is just a cop out. The California band is led by singer/songwriter Will Georgantas, the artist that Conor Oberst has always dreamed of being.  With an unprecedented output since the mid nineties, and a revolving door of band members (himself being one of the only constants), Georgantas writes the songs you only dreamed of writing at 14. They are chockfull of truth, consequence, and awkwardness. Even if the music you fell in love with as a teen isn’t as relevant as it once was, C’mon Thunder manages to avoid that problem.

The album comes on like a tornado: slow and unassuming. Songs like “We Kissed and Ran Some More,” “To See Things Begin,” “Write Me a Caption,” and “Your Shoes Are Stupid” reminds even the most jaded music elitist or vinyl vermin exactly what it’s like to just listen and enjoy the moment. While there are a multitude of gems on this record, the one that sticks out from the coal most is “We Kissed and Ran Some More,” featuring a distorted classic rock riff laid against lyrics like: “And I think about my darling/ and i think about the darkness/ and I think nightlight from us alone it did shine/ running together in the gravel highway march/ and wondering if I would ever feel half as alive.”

C’mon Thunder awakens something that has been dead, or at least hibernating, inside of you. It reminds you of a time when music was just music, nothing more. Georgantas and company manage to awaken this entity while channeling REM, Elliot Smith, and Guided by Voices, while retaining their independence, originality and distinction from the crowd of wannabes.