The New York Breakfast Releases DON’T CALL IT A COMEBACK 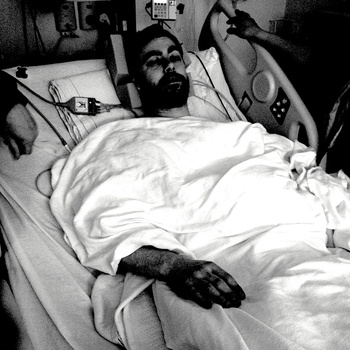 Anyone who takes even a brief dip into the waters of Buffalo’s live music culture quickly realizes that Steak and Cake founder Brandon Schlia is one of its proudest captains. On the eve before his label’s third anniversary show (which also happened to be Valentine’s Day), he was part of an unforeseen and harrowing turn of events that left him hospitalized. Showing perseverance in the face of adversity as well as true rock n’ roll diction, the two part show went on, and even included Schlia, home from the hospital and sitting on a chair in his living room.

The New York Breakfast has always been an intimate vessel, and these songs make the listener feel as if they’re spying on Schlia in his bedroom while he plays music while working through recovery. It’s art therapy, taking something tragic and molding it into melody. All four songs tell a different part of his story in a blunt and honest tone.

The album begins with “Lucky,” a track that is a thank-you to all of the people who kept the show moving, and came out to support the label. It moves on to “29,” an intensely moving song that relates the incident itself, cataloguing thoughts and observations. “Forgiveness”  begins with a sample of his heart monitor in the hospital. The lyrics are post-surgery, and he muses on what it means to pardon someone for their actions. “Valentine” is a love song for Schlia’s own valentine, thanking her for taking care of him through rough times, and probably also to compensate for what must have been a horrifying Valentine’s Day for the both of them.

Sticking to the DIY Steak and Cake approach, the songs are stripped down, gritty, and bare their bones to the world while being well layered enough to create a place for themselves. This sounds like a project that Schlia conceived of to work through an extremely personal catharsis, and then released to the public nakedly and openly. Well Brandon, we also consider ourselves lucky that you’re still alive.