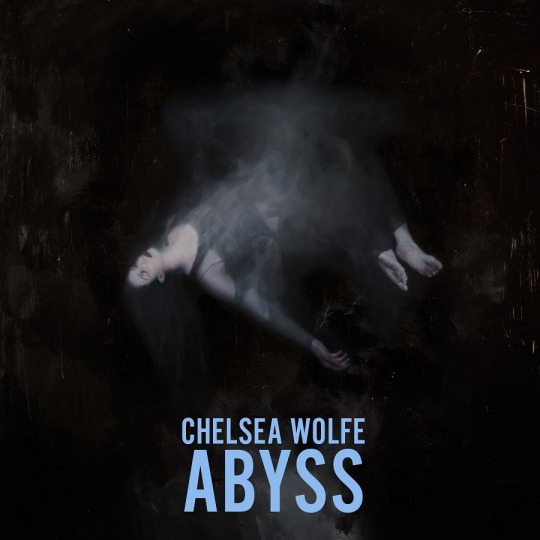 About a week after listening to Chelsea Wolfe’s new album, Abyss, out on Sargent House Records, I had a lucid dream of what it was like to suffer from sleep paralysis. In the dream, I woke up, but my body was still, unmoving. A shadowy, demonic figure attempted to attack me, as I screamed obscenities and chants to make it go away. I woke up, finally, only to realize it had been an illusion. Upon waking up, again, in my bedroom in Buffalo, I felt disturbed and a little violated. This is a condition that Ms. Wolfe deals with frequently. Sleep studies say these figures, aka “hypnagogic hallucinations,” are a combination of the fact that we are still dreaming and the ability to access collective realms beyond the mind. While someone is experiencing sleep paralysis, their amygdala (what controls our fear systems) gets jacked up, and if we’re still dreaming, this projects our worst fears into the room.

This feeling of foreboding leaks its way into Abyss, channeling Wolfe’s chronic sleep and dream issues. She states in a press release that Abyss is meant to “have the feeling of when you’re dreaming, and you briefly wake up, but then fall back asleep into the same dream, diving quickly into your own subconscious” and vibrates with “the hazy afterlife…an inverted thunderstorm…the dark backward…the abyss of time.” Throughout the 56 minutes of the album, Wolfe confronts what Jung would call the “shadow” self, the underbelly of society, the dark pool of our memories. Indeed, the album title inspiration came through Jung’s semi-autobiographical book Memories, Dreams, Reflections. A specific passage cites his dream of falling into a cave, an abyss. That endless stretch of time, the infinity of our own consciousness and universe. These themes are ever-present throughout Wolfe’s discography, but translate themselves sonically on a direct scale in Abyss. Wolfe seems like a person with the emotional skill of an intense feeling for life, which is reflected throughout the album. It’s heavy, metallic, cathartic, brooding and beautiful.

Her songs are a conscious direction away from the self, and spread out what inspires her in the outside world. It’s like Wolfe discovered her own door, labeled “CW” that lead to the collective disasters of the world. “Here, write about us, we’ll find you,” they say. There, in that space, it’s digested and brought to light through song. The second track on the album, but the first single released, channels the poetry of Chinese 24-yr-old Xu Lizhi, who committed suicide in 2014. He wrote about the harsh conditions of working at Foxconn in Shenzen. His poem “I Swallowed An Iron Moon” branded itself into Wolfe’s repertoire:

“I swallowed the hustle and the destitution

Unfurling on the land of my ancestors

Into a disgraceful poem.”

The release of “Iron Moon” indicated the shift toward a heavy sound. Producer John Congleton (Swans, St. Vincent) brought a colder edge to the album, as opposed to Wolfe’s initial intention of warm and hazy. The coldness vibrates here, as the opening drone feels like an industrial machine humming. The crescendos build into a graceful cacophony, with a quiet ebb as Wolfe sings in a soft-loud-soft dynamic.

Similarly, the opening track “Carrion Flowers” gives a commanding, foreboding, yet seductive introduction. Inverted riffs and pounding bass drums surround the operatic vocals, “We learned how/ on our own/ never needing/ help from you.” Industrial snippets pounce as the melody gives way to an enchanting echo. Wolfe’s songs often feature this distant wail, a second self, dual harmonics twisting together. The video for “Carrion Flowers,” directed by Wolfe and long-time collaborator Ben Chisolm, was filmed in both Los Angeles and New York.

The “Carrion Flowers” video directly shows the devastation that California faces with the drought, as it was filmed where the water comes into Los Angeles, near Wolfe’s residency. She states via Stereogum, “…at one point I was laying in the middle of an abandoned canyon road with no chance of a car coming, and it was very surreal and quiet. I closed my eyes for a moment and when I opened them there were vultures circling overhead like I was some exotic roadkill, so we filmed them too.”

But even beauty can come from death, as a carrion flower proves. The line from fashion designer Yohji Yamamoto rang through as a precursor for the album’s exploration, “Perfection is ugly. Somewhere in the things humans make, I want to see scars, failure, disorder, distortion.” This sentiment is apparent via Wolfe’s previous album title, Pain Is Beauty. And it’s true. The quieter moments of desperation, the sorrow, the longing, make for raw, rich material. We need more of this honest expression. In a Noisey video interview, Wolfe states how she does like to keep it positive, though. Not that death doesn’t cross her mind often. From her Scorpionic point of view, “Life is leading up to death, you have to think about it.” To Wolfe, death is like a character (she cites The 7th Seal as an example). Not having the “pleasure” of experiencing death in her life, perhaps this is an abstract expression, but it doesn’t mean that death can’t show up in our daily lives anyway. There are small deaths, poetic deaths. We can shed our personalities, relationships, careers, and homes. Humans are dying every second they are alive.

“Grey Days” came from a conversation with a person who had recently come out of jail, starting a new life. Via Billboard, she states that the other half of the song came from the movie Princess Mononoke‘s concept, how “darkness is represented by an iron ball as a sort of demon that ruins you from the inside out.” Distant, anxiety-inducing breathing follows the opening guitar and drum riff, leading into her lyrics, “How many years have I been sleeping?” Enriching, heart-twisting viola from Ezra Buchla soars underneath her soprano bars, soon to be masked by a hazy effect. It’s like listening through a screened door. The concept of iron seems to ripple throughout the music, a steadfast substance broken down by the softer, vulnerable parts of existence. We’re all trying to stay strong, but sometimes we need to breakdown.

The songs “Crazy Love” and “Maw” hold as the gentler pieces among the intensity. “Maw” features a dim, electric lead-in with Wolfe’s half-whisper singing “Where are you?” as atmospheric tones stretch on. A “maw” is the jaw of the beast. Beauty rippling out in the throngs of death. Even though we may feel like we’re trapped in the “negative jaws” of life, we can find beauty, truth, and strength. This doesn’t mean we have to suffer or gain depression from this experience, we can bring our unwavering dedication to what’s here, what’s now. We can choose to forgive the past, to move forward with our loving memories. At least that’s what “Crazy Love” signals for me, this desire to keep going and keep moving with every memory we hold dear. The inflections are gentle, addressing a precious acoustic strum. Wolfe asks, “Can we afford the years, my lovely friend?”