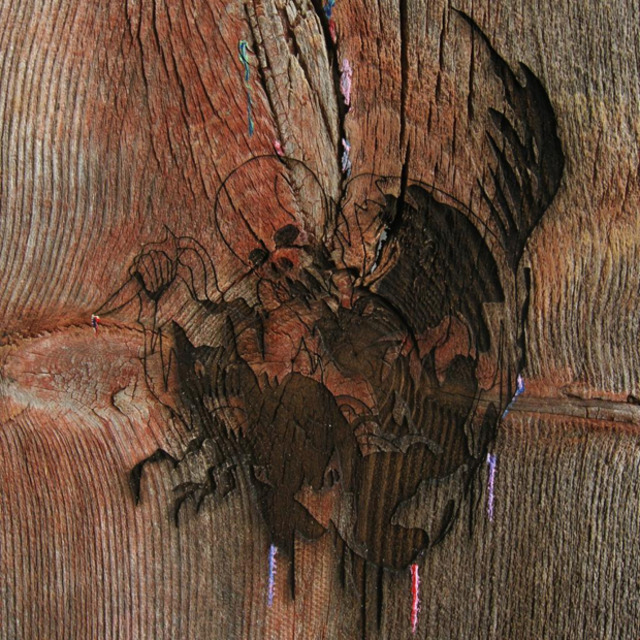 After more than a decade together as one of the most prolific and unorthodox psychedelic-pop indie bands, Animal Collective’s founding member Avey Tare has decided to break away and form an alternative trio side-project called Slasher Flicks. Unlike many of the less than stellar attempts to start a band anew, Tare’s new musical experimentation is strikingly catchy and stylistically cohesive.

It all starts off on “Little Fang,” a sleek psych-funk jam that compels listeners to “remember that your gifts are your game” all on top of rhythmic keyboard strokes and airy vocals. Thankfully, Enter the Slasher House downplays Avey Tare’s tendency to blow instrumental arrangements out of proportion with extraneous layers of sound as was the case on the last Animal Collective album. Stripping the songs down helped this trio, which includes former Dirty Projector member Angel Deradoorian, especially on the trippy “Strange Colores,” a track that finds the perfect balance of percolating synths, blaring rhythms, and trance-inducing vocals.

“Blind Babe” delivers the kind of infectious hooks that stick with you all day and end up humming to yourself whether you realize it or not. Album palate cleanser, “Roses on the Window,” is a straightforward, yet euphoric song that provides a calming retreat to some of the more chaotic, beat heavy tracks. Listening to all of the songs in succession definitely adds up to something more than the simplistic structure most of the tracks’ instrumentals hold. The quick succession and  flowing pace of the album makes for that full-circle experience albums should hold and showcases just how Avey Tare’s Slasher Flicks means more than simply a side project.

This group really shines the most on album opener “A Sender,” where a rattling groove along with an energetic guitar layout make Tare’s singing of  “you’re going to die” evermore haunting. For the most part, Enter the Slasher House was built around this theme of a clichéd horror movie, but it comes across as much more than that. Surely, the erratic keyboard and instrumental compilation of “Duplex Trip” add to that whole eerie aesthetic, and the abrupt switch in sound on “Catchy (Was Contagious)” doesn’t fare too much better. However, this freakish vibe is counterbalanced by the other songs on the album making it a boisterous bubble of nonstop silly-creepy jams that combine for an alluring second choice band to Animal Collective.