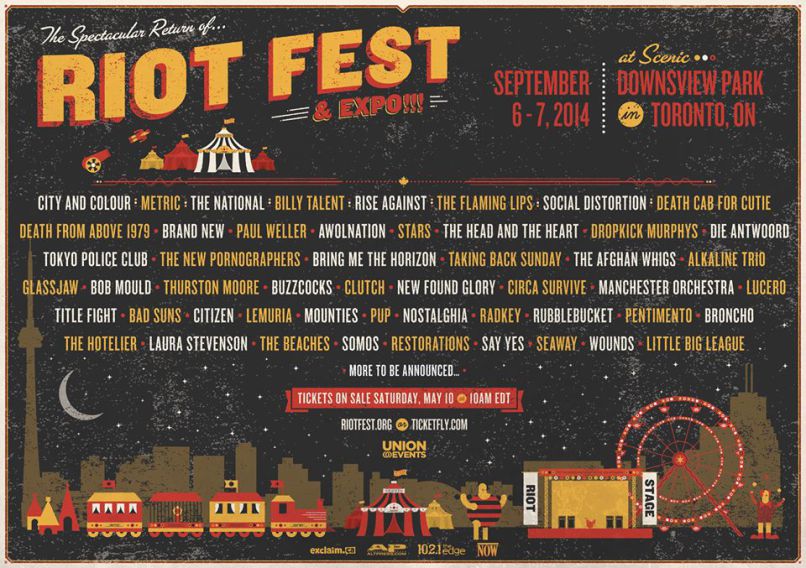 This September, Riot Fest will celebrate its 10th anniversary with shows in Toronto, Chicago (the festival’s founding city), and Denver. We can thank fest founder Mike Petryshyn for selecting Toronto as a location. Being a Buffalo native, Petryshyn, as so many of us Buffalonians so do, would frequent the city as a youth to catch shows that sadly did not include WNY in their routing, so selecting the Ontario city as a Riot Fest host only seemed right. Riot Fest will return to Toronto on September 6th and 7th at the fest’s new location, Downsview Park. The eclectic and, naturally, Canadian heavy lineup is stacked with bands like the Cure, New Pornographers, the National, Stars, Manchester Orchestra, and many more. Scroll back up to the header pic for full lineup.

Tickets, which went on sale in early May, are still available at this link. To make life a bit easier, for the first time, the festival is offering a layaway service to break up payments into three or four installments, certainly a helpful program as all of those concert/festivals can tap you out over the course of the season.

If you have set to purchase tickets, we are happy to be able to offer two weekend passes to the Toronto installment, thanks to the folks over at Riot Fest. Entering for a chance to win is pretty easy. Just share and like this post via Facebook or by retweet and follow Riot Fest on Twitter, and you are in the running. The contest will run for two weeks, with a winner being selected on Thursday, June 19th at noon. Good luck!