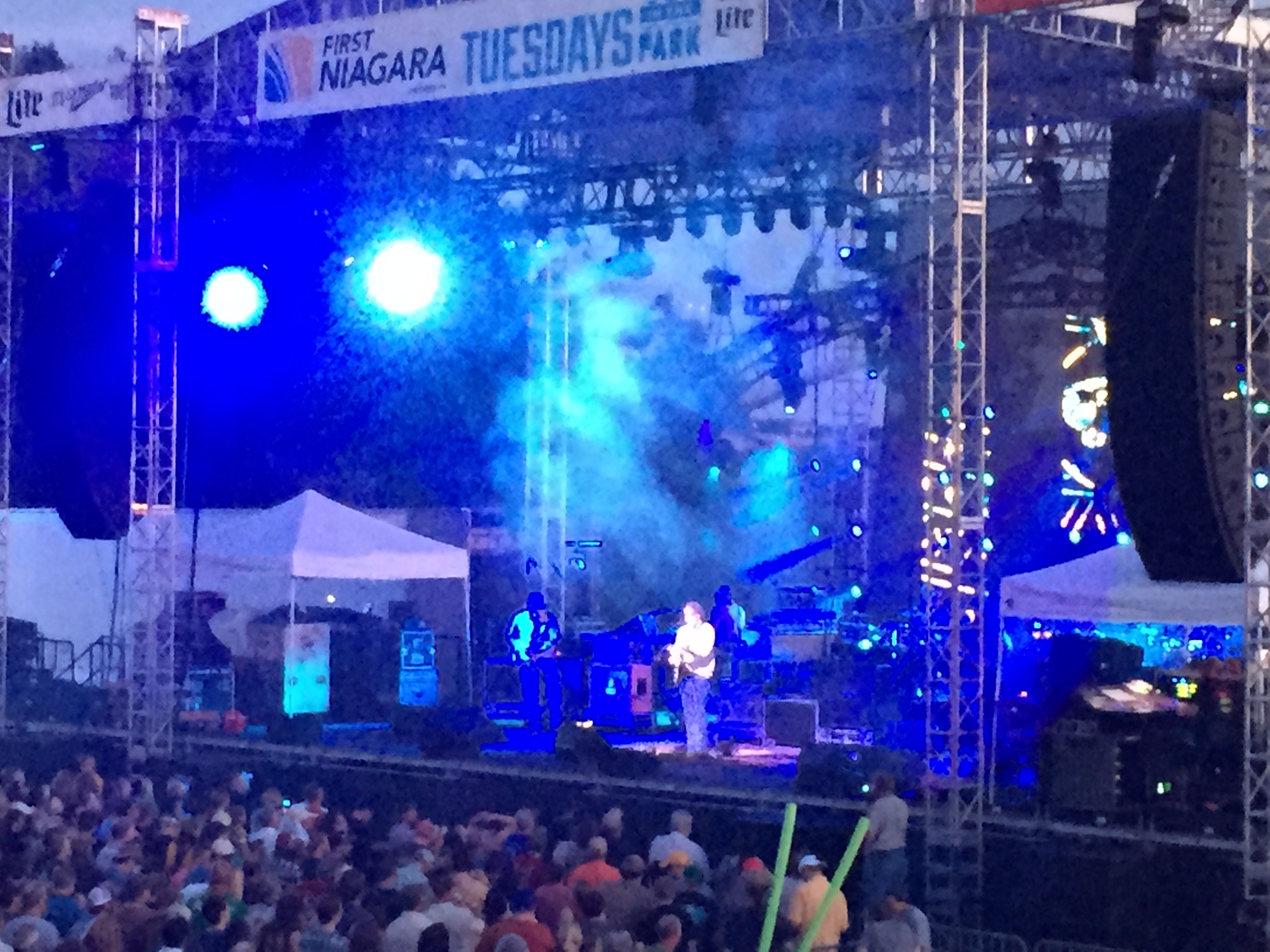 Last year, Widespread Panic suffered a similar fate to Athens after Poseidon lost the city to Athena in a great challenge. Irrate with anger, he flooded the city in spite, as he would Artpark that fateful night. Attendees were compensated with tickets to Ziggy Marley or Gregg Allman, but those remedies could not mend the emptiness that those who left after a half show felt. Panic would not let the people of Western New York down twice, and played a strong and complete show to kick off their 2015 summer tour earlier this week.

The band that can outsell Taylor Swift in the south played for an about two thirds full Artpark crowd Tuesday night and it was a beautiful evening indeed for music. Last year, before WP’s fall tour, founding member and drummer Todd Nance left the band for personal reasons. Wasting no time, the band picked up Duane Tracks, brother to former Allman Brother guitarist, and at 36, already guitar legend, Derek Trucks. Duane also happens to have espoused Widespread guitarist Jimmy Herring’s daughter, marrying together the two southern legends for all eternity.

Taking the first few songs to warm up to the crowd, the sun was still beating down and everyone was shuffling around looking for a place to make camp for the next few hours.  Kicking off with “Travelin Light” and then “Cant Get High,” one thing was already certain, the change in membership would not play have any affect in how tight the band has historically been. Trucks knew every cue, every transition, and it was as if nothing had changed. As the set progressed, the jams were stretching out, and Widespread was back into its groove. The first set wrapped up with a very strong trio of “Space Wrangler” > “Greta” > “North.” If these guys can put together an end to the first set like that, there could only be high expectations for the second set.

And those expectations were exceeded. The sun began to set as the band returned to the stage, and the first few songs were no better or worse than the selections from the last set. The first of a string of five songs to close the show really brought everything home. Somewhere in the “Cease Fire” jam, I looked over to a friend and said “This is it, their tour just started right now.” The band was on fire, not missing a note for the rest of the show.  In a world of sloppy live performances and forgiving crowds, Panic needs no forgiveness because the group make no mistakes. Expectations for themselves exceed any that an audience could set for them. Transitions are perfect, and more importantly every member of the band seems to know exactly where the song is headed next.  A truly remarkable feat for a band with so much improvisation.

As for the venue, let me begin by saying that Artpark has been the venue I have promoted, loved, and defended year after year. I remember my final years in high school as filled with anticipation for that year’s summer lineup. The first time I ever saw moe. was at Artpark, and the feeling of walking into a free show down a messy hill looking out over the Niagara River was perfect.

Understandably, the venue had to charge admission because attendance was getting out of hand quickly. It also began a small VIP section that was directly in front of the stage and ran about 10 feet back. I always thought “Hey if people want to pay more to be literally right in front of the band then let them.”  With every year, that section has gotten bigger and bigger and to my distaste, the area where general admission ticket holders could stand on flat ground smaller and smaller. To Artpark’s credit, that section was usually pretty full, accommodating to the buyer’s desire.

This year, though, the VIP section covered the entire span of the flat pit area in front of the stage, and was about half to two thirds full. This was a very big disappointment to anyone hoping to dance on something other than a sharp gradient. My hope is that Artpark will consider this, or I fear that the edge it once had over other venues will quickly slip away.

Finally, credit card machines were down and guests were being charged $3.50 to use the ATM.  Artpark is a great venue, but consider cash if you are heading out there at all for the remainder of the summer.