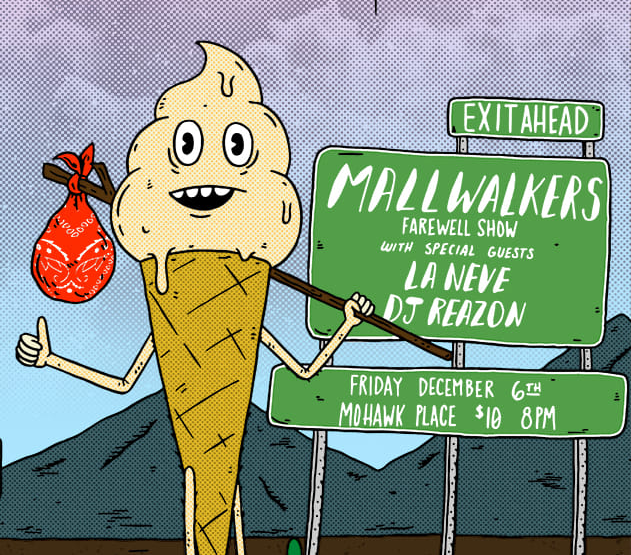 They did what they set out to do, and now local DIY punk heroes Mallwalkers are saying goodbye tonight after nine years with a full scale blow out at the Mohawk with Providence disco punk La Neve and DJ Reazon. This last waltz will feature two epic sets from the band, the first spotlighting the core (Jaz Frazier, Dan Carosa, Stephen Schmidt, Stephen Floyd, Bob Fullex, Norelle Merlo, Tony Flaminio, Chelsea Merlo, Mario Fanone), with an expanded Stop Making Sense lineup featuring Bryan Johnson, Ethan Hayden, former MW drummer Jason Bauers, and Jenny Kubicki bringing it all home to end this Mallwalkers decade in art punk funk style. But fear not, Mallwalkers do have a posthumous final album due out next spring, so they’ll never be far from our hearts or record collections.

Opening the show will be La Neve, the avant-garde disco punk solo project of Downtown Boys songwriter and guitarist Joey DeFrancesca, while DJ Reazon will be keeping you moving with the most tasteful soul/funk/whatever jams. Doors are at 8pm and cover is $10 or pay what you can.