Taylor Swift – “Shake It Off” 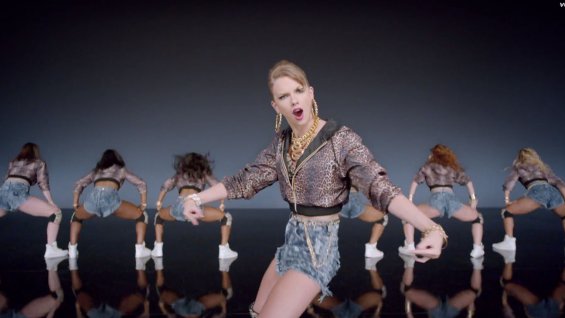 The popular image of pathetic-failure-chic is tired as hell.

See: He’s Just Not That Into You, Girl Most Likely, and other movies in which potentially capable women get sucked into very cute, very milquetoast humiliations and histrionics. Taylor Swift can often be the aural embodiment of perpetuating those stereotypes.

The Bechdel Test is just based on a little conversation between two characters in a 1985 comic strip, Dykes to Watch Out For by Allison Bechdel. It is usually applied to film, but it works for other media. All the film/album/novel/what-have-you needs is a) at least two women who b) have conversations c) about something other than a man.

The heteronormativity and the perfect image of a relationship, the super sublime womanhood and manhood we’re supposed to aspire to, really does run so deep that the art which rewards this complex is continually, recursively rewarded ad nauseum.

Yes, this huge girly role model, this most simple of tests. Any indignity at societal grooming is brought on by a man (“I Knew You Were Trouble”), the big urge to hang out and love it up with girlfriends is brought on by your ex-man (“22”), lives are ruined at the hands and stupid boy crotches of men (“Fifteen”).

I need to stop breaking for a moment to say something that we should all appreciate: the thing I do love about her is her willingness to suffer out loud. Vulnerability and apparent tenderness always gain my respect, and I don’t want to pit myself or anyone else against Taylor Swift—I want to talk about the ideology.

We’re still just looking at womanhood, here! What about something deeper? What about culture?

Cultural appropriation has been a buzzword of late for a reason.

A mortifying amount of goods, aesthetics, and practices, both popular and otherwise in culture, are being exploited for their novelty and it doesn’t seem like anyone is learning.

Katy Perry and Miley Cyrus are obvious examples of pop stars who routinely don’t celebrate and humbly exchange culturally significant acts through collaboration and education. Instead, they appropriate the act and make it a fad.

This isn’t a necessary, postmodern fall from tradition—something I’m usually all for. It’s not appreciative. It’s the continuation of weak diversity and power in just one dominant mess of a demographic. It’s an insult! It’s ahistorical noise!

Multiculturalism and diversity are both extremely important, but we walk a fine line when it comes to being educated and appreciative, earnest and humble in our tastes, vs. stomping and stealing. Ditto with deciding whether a cultural act is a human rights issue or morally exempt—but that’s less of a representation-based issue.

Taylor Swift’s new single, “Shake It Off,” is exciting on one level—it’s not really about a man!

Most of the time, she’s almost winking at her own pathetic-failure-chic Victim lite persona. No one ever said it was ideal, but I guess I’ll take it.

But the music video is childish, embarrassing, and just like her dancing, it does not tread lightly. The clip has already quite publicly pissed off Earl Sweatshirt, member of Odd Future.

Where do you think Taylor’s naïve shrugs and perplexed mugs at the camera, dressed up in cute and convenient costumes as her prop-dancers break, fall on that spectrum?

Honestly girl, if that’s the way you’re going to go about it, please stay in your lane and keep doing Keds commercials.