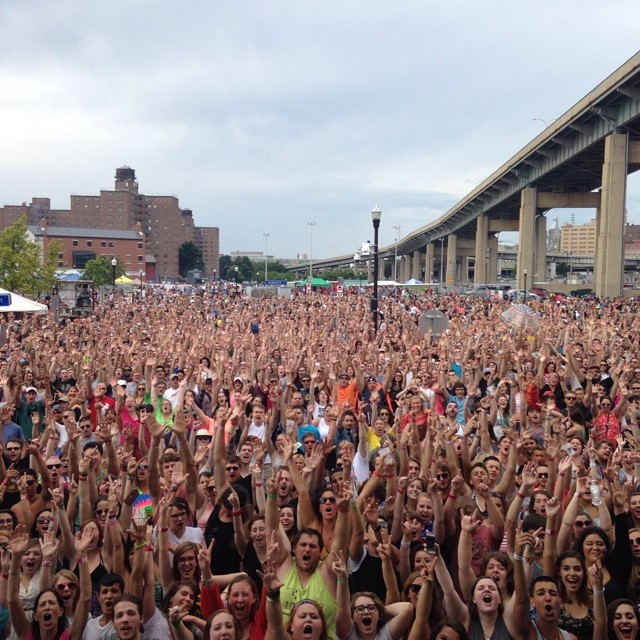 Considering that Alternative Buffalo 107.7 is only nine months old, it’s a bit of a miracle that their inaugural one day festival was as much a success as it was. After gestating for three full trimesters, the fledgling radio station has given birth to something that should, realistically, become a part of Buffalo tradition.

The day’s execution had its flaws: the beer tents periodically ran out of water at an event where no outside water bottles were allowed and it was not made clear that the food trucks wouldn’t accept Canalside food/beverage tickets. But overall, given 107.7’s youth and that it was a virgin voyage for the station, the experience offered was incredible. Not only did the rain mostly stay away in spite of weather reports to the contrary, the acts themselves were sharp, lively, and remarkably well-connected to the crowd of ten thousand.

After showcasing the ecstatic old-timey ramble of Artvoice BOOM competition winner Folkfaces, the event kicked off with New Jersey’s Brick + Mortar. Though the band seemed unsure of themselves based on their comments, they had no need to be nervous. They were followed by NYC’s Semi-Precious Weapons who carried the day forward smoothly.

Big Data then milked the marketing potential out of their satirical bent toward social media and NSA-inspired fear of everyday espionage. A robotic recording instructed the audience to tweet and post to Instagram about the band, simultaneously mocking and making use of modern habits. Joined by Rochester’s Joywave for their big single, “Dangerous,” the band played a more than solid set.

Afterward, Bear Hands performed a slew of slick, smart songs to perfection. When their explosive hit “Giants” closed the gig, the crowd’s couples responded instantly. I spotted more than one romantic pair singing the lyrics “I know you love me / I am loving you more” to each other.

Kongos and Bleachers both gave tremendously bright, addictive, and involving sets. The South African group of accordion-boasting brothers and the Killers-influenced brainchild of fun.’s Jack Antonoff, respectively, were both brilliant crowd-pleasers.

Cage the Elephant provided the logical conclusion to an electrifying day. Regardless of one’s feelings about his band’s music, Matt Shultz is an undeniably dynamic frontman who loves and is loved by his audience. His bare-chested crowd-surfing antics brought the night to a feverish, frenetic end.

As kids climbed street signs and moshed to the max, “kerfuffle” (def. “a commotion”) may well have been a more appropriate description for the event than its producers anticipated. Still, the chaos was invigorating and the concert was a smash. Kerfuffle is bound to become a Buffalo institution and anything that brings this much positive joy and life to the city is worth the commotion.