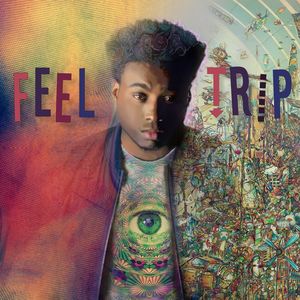 Buffalo rap posse MileHighMuzik is a frequent feature for for the blog, namely because of their quality output combined with a seemingly never-ending stream of releases. Last December, they released a new track every day of the month, calling it Juugcember, and did the same thing this past summer in Juugly. Heavily contributing to the group’s success is leading rapper/producer M-A, the recent releaser of solo mixtape Feel Trip. The tape fins M-A working with members of his crew, but also take the experimental path that can only come with an independent mindset.

The album kicks off the with the “Feel Trip Intro,” a melodic trap ballad of careful production and echoic singing vocals. The track is in the same vein as a Travis $cott song, but is brighter and perhaps with more substance, as M-A calls for his girl to stay with him as he falls. Its evolving construction is greater than that of a standard hip hop track, and alludes to the visions M-A has for the rest of Feel Trip. “How U Livin?” is one of M-A’s best moments as an artist. When he isn’t rapping on the tune, vocals couple with the singing of Miles B in a Kanye-esque product. M-A does do some seriously great rapping on this song too, rapidly knocking out “green” wordplay lines while being speculative about his spot in life and music at the same time.

The outro on “How U Livin?” is one of the many moments on this project where the production shines just as, if not more, hard than the vocal output. M-A closes down the track with boosted drums and dazzling piano, drawing from the track’s beat while leading into “Another Stop” flawlessly. M-A’s production has always been top notch, but the little customizations he does to the tracks on here are ridiculous. The footworking drums at the tail end of “Another Stop” come from nowhere to close out the buildup of the track, and it’s awesome.

It’s not uncommon for a rapper to talk about the work they put in, but with M-A you can hear it before he even says it. “Put the City On” is a one-take song of appreciation to the city’s artists, and his many compadres in MileHigh and Buffalo make appearances on Feel Trip. Feel-good track “Thank You” features Dan Marsh and Meechy El Camino, and the sparing “Just Try” gets assists from Karma, Yo Leek and Xavi.

The mixtape closes on “Outro,” a soul-sampling reflective track that documents M-A’s trip from a nobody music-wise to an incredibly well-rounded up and comer. The Juugernaught proves time and time again on Feel Trip he can produce, flow, tell stories, and construct entire songs with the best of them. Very few songs on here are the classic verse-chorus-verse we see regularly with hip hop tracks. M-A’s experimental structures call upon elements of different genres and subgenres, and the final product is an enjoyable, exciting mixtape from a great young artist.

Listen to “Another Stop” below.