Major Lazer – Peace is The Mission 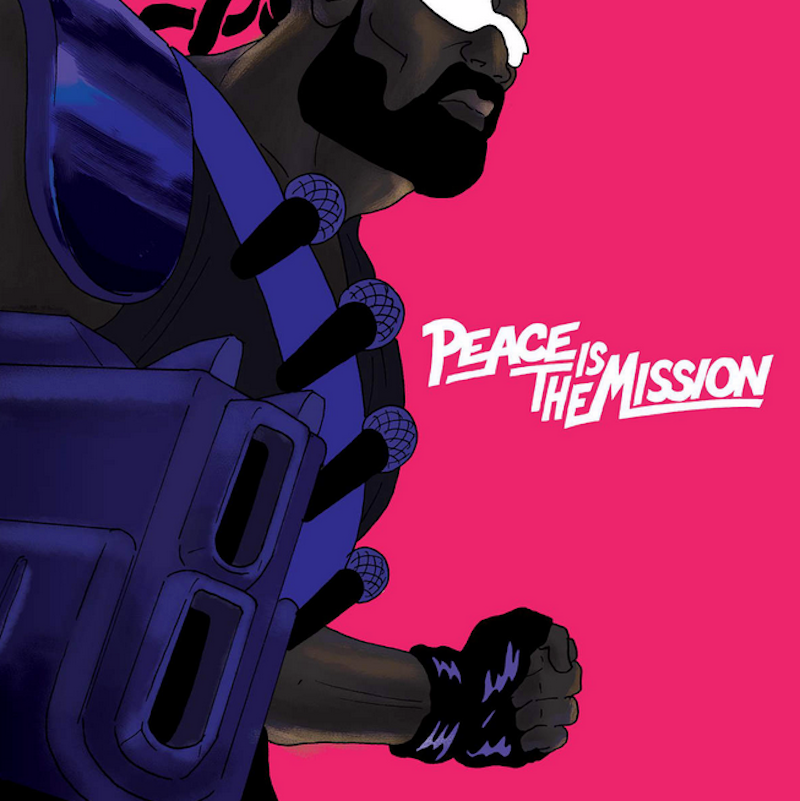 There is an appeal to Major Lazer even to those that don’t subscribe to the EDM culture. Guns Don’t Kill People, Lazers Do caught some attention in 2009 with one of the strangest combinations of sound heard at that time: reggae mixed with electronic dance music, smashed together with a sense of humor and a cartoon laser-toting Jamaican renegade soldier.

It was fun in 2009, but that’s not the case anymore. Peace Is The Mission removes a good amount of the originality of Major Lazer and brings the project into the top 40. Lazer-founder Diplo seems to be travelling down the path that fellow pop producers Calvin Harris and Pharrell have recently went down: producing pop tracks for years, mostly under the radar, and eventually gaining enough cred in the Illuminati circle to release their own hit albums.

While this album is probably going to do great in the sales and streaming department, it really is the watered down version of what the Major Lazer project used to be, that being a weird, pot, and dance infused link between traditional Jamaican culture and the electronic/pop world of the U.S.. Now, the first single off the album, “Lean On,” is in the first quarter of the Billboard 100 and has barely any common ground with the Lazer’s first two albums. It’s good in a pop sense; it’s just nothing new to our ears.

Peace is the Mission is on the shorter side, clocking in at 32 minutes, much shorter than first two LPs that each approached an hour, and is probably due to the fact that Diplo also just had a big release with Skrillex called “Jack Ü.” Many of the songs on the short LP are about as good as DJ samples get with a few purely pop songs in the mix, featuring the likes of Ellie Goulding and Ariana Grande.

“Lean On” is still climbing up the charts and is one of those refreshing top 40 songs that doesn’t feature Rihanna or Bruno Mars. In their place, it features French producer, DJ Snake (of “Turn Down For What” fame) and MØ, grunge-inspired pop singer out of Denmark. Again, it’s nice to see Diplo giving a little bit of a boost to pop artists that might not be as well known in certain places, given his and Lazer’s worldly reach. At the time of this writing, the song is hovering in the top 5 in most countries worldwide and is sitting pretty at #24 in the US.

Other strong tracks on the album include “Light It Up,” which features Nyla, a relatively unknown Jamaican reggae/pop singer. The song is pretty traditional Major Lazer, basically a reggae beat layered under a ton of weird blips and synth noise. It starts out fairly easy-going and then develops after about a minute with some real catchy arpeggios.
The strange and intense “Too Original” stands up very well by itself too, and is more of what we like to see from a Major Lazer number. The track begins with a dopey, loud simplistic beat and flow into an intense rap, with little pitch-shifts here and there. The song features Jovi Rockwell (Jamaica) and Elliphant (Sweden). The former has an old-timey sounding kick right before the drop. There’s the underlying synth that almost mocks a tuba, creating a real dopey and drugged out circus feel to the song.

With Major Lazer, there are pop songs, and there are Major Lazer songs. This album lacks the latter, and while It’s not bad, the record just doesn’t have the originality that we have seen from Major Lazer in the past. It’s still very catchy, and as proven by just the one single so far, Diplo and his crew are going to see a lot of success with it.

Oh and let’s hope they call upon Eric Wareheim to direct another video sometime soon.