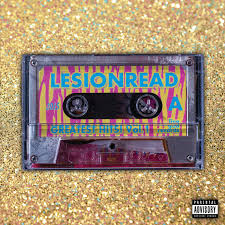 Just a little shy of two years ago, Lesionread exploded onto the scene opening for Wild Nothing at the Tralf with an experience high on avant-garde mischief and mayhem, and Buffalo frankly hasn’t been the same since. The performing moniker of ever ambitious artist Shawn (Sean?) Lewis (Louis?), Lesionread has been an adventure ever since: staging fun yet challenging happenings, constantly refining his sprawling sound, doing his best to live his “art all day” mantra, and in 2015, he’s compiled two year’s worth of work onto a CD/tape cheekily titled Lesionread Greatest Hits Volume 1, and it’s our Album Of The Week.

Still, as cheeky a name as Greatest Hits is for a debut album, it’s not entirely undeserved. From the start, it was clear that he wasn’t thinking about his art strictly in terms of songs, instead focusing on the experiences he’s orchestrating, and Lesionread has always been fine tuning what works and blowing up what doesn’t work, making Greatest Hits more a tour of his artistic oeuvre. The over the top electronic punk of “Everything He Needs,” his earliest success dating back to that Wild Nothing show, kicks off Greatest Hits with a summation of what he’s up to as a fun-loving and transgressive artist, getting you moving while he gets weird with tricky rhythms and very off kilter keyboards.

Early on, Lesionread saw that his show’s were more fun when everybody danced so he started introducing more danceworthy beats and seductive keyboard sounds like the ones found on “I Want To Fall In Love (The Moment That I Tell You),” featuring crooning vocals and a fierce desire to get in your pants, vital artistic breakthroughs now preserved on album for all time alongside other classics like “Neutron Bomb,” the introspectively minimalist “So Lonely Without,” and his manifesto, the propulsive and agitated “$$$ Art All Day $$$” which finds the artist asking fundamental questions of himself and his audience about art, commerce, and making a living. For all the sonic mayhem of Greatest Hits!,everything has a specific purpose and serves a point, just like his intricately planned live shows.

Rounded out with some very out there remixes by friends including Ay Fast and Jon Bap, Greatest Hits! Vol. 1 is a tremendous artifact from Lesionread, and a great introduction to an inspired local artistic polymath and the artists pushing the sound and the art scene of our city along. Available on CD and tape, you can obtain it and other goodies here and digitally (which isn’t as much fun) here.