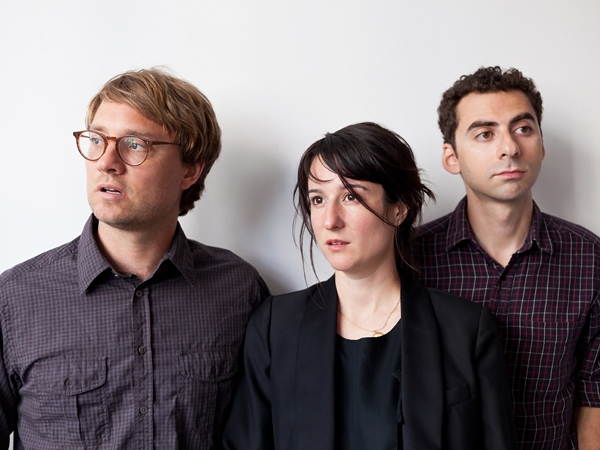 On October 1st, Buffalo will welcome Jeff Tweedy (and his son Spencer) to the stage of the Town Ballroom for a performance in support of the frontman’s (of Wilco fame, for the few of you who didn’t know) solo album, Sukierae. Opening support on their fall tour comes from Hospitality, a buzzy avant-pop three-piece from Brooklyn, and buffaBLOG was lucky enough to catch up with the band’s bassist, Brian Betancourt, for a little Q&A a few days before the show. Touching on subjects including Hospitality’s 2014 full-length Trouble and ambidexterity, Brian and the blog hit it off well. A warning: both Brian and the blog have the same initials (BB / bB), so read carefully!

buffaBLOG: Your latest album Trouble is decidedly spacious and even dark at times, which is a bit of a stylistic departure from your self-titled. I read that the new sound was intentional, what kind of efforts went into crafting that new sound?

Brian Betancourt: Working in the studio with Matt Boynton helped us pare down the arrangements a bit. On the first record, a lot of the overdubs were done by Nathan at home, but deciding to keep most of the work in the studio along with an outside set of ears helped us to use less ingredients but to really make them count. It’s just another way of working, but it led to an interesting “less-is-more” kind of vibe for several songs.

bB: From the electronic influence of “Last Words” to the delicate acoustic nature of “Call Me After,” Trouble covers a lot of ground. How was the songwriting process different this time around?

BB: “Last Words” might stand out because it started as a song of Nathan’s that he brought to the band. He has a background in avant-garde electronic music and is really gifted at shaping a world out of synths and drum machines and such. But more generally, we were most concerned with what arrangement each individual song required, and that made for a more eclectic record.

bB: Trouble also seems to have no shortage of auxiliary instrumentation—horns, synths—a feat, especially for a three piece band. How will that be handled on tour? Has your lineup changed at all?

BB: Actually, the first record has its share of horns (“Friends of Friends, “All Day Today”) and synths (most of the record!), but maybe were used as more of an arrangement tool than a main ingredient of a song, like on some parts of the new record. We’ve toured in a number of different incarnations, switching around between samplers and synths and bringing in extra players, but for the upcoming tour we will be going back to trio mode.

bB: The three of you have been writing music together for about 7 years now. Is there any material you feel you’ve outgrown, or is it all still very relevant for you?

BB: We frequently switch songs in and out of the set depending on what seems to be working at the time. Sometimes songs just need a break to feel exciting again. Other times we’ve changed the arrangement to keep them fresh.

bB: Are you relatively all on the same page as far as musical influences go?

BB: We have a lot of overlapping influences, though Nathan has a strong background in modern composition and electronic music and Amber and I maybe had more of a rock-and-roll upbringing. We’re always sharing our favorite music with each other, though, especially in the van.

bB: What about non-musical influences? Is there anything specific you would say Hospitality draws a lot of inspiration from?

BB: I bet lyrically, yes, but that is a question for Amber!

bB: I noticed you play a lefty bass! Are you actually left handed?

BB: I don’t think anyone in their right (left?) mind would play lefty without actually being left-handed. It’s very difficult to find guitars and you can never borrow someone else’s in the case of a show-mergency. You do often see the opposite, most likely because righty guitars are so much more common. There are lots of interesting righty guitarists who are actually left-handed (David Byrne, for example). I wonder if their sense of rhythm is any different, since they don’t strum with their dominant hand.

bB: You guys (and gal) are about to hit the road with Tweedy- How’re you feeling about that?

BB: We’re really excited! I think Mr. Tweedy is a talented songwriter, and he has impeccable taste in guitar tone. A Ghost Is Born is like a warm, fuzzy blanket I could live under forever.

bB: Do you have any fun stories from previous tours?

BB: If you ever meet anyone from the band Porches or Frankie Cosmos, ask them to play “Snaps” with you, and prepare to have your mind blown.

bB: Trouble is your second full length with Merge Records. How is your relationship with your label and labelmates?

BB: Merge is great. We just played their 25 year anniversary festival in NC and got to meet a lot of other Merge bands. I was fortunate enough to share a meal with the wonderful Teenage Fanclub’s Norman Blake, who is a really hilarious and down-to-earth guy.

bB: As far as new music goes, are there any upcoming releases on your radar?

BB: My go-to answer is the upcoming record by our friends Glass Ghost, called LYFE, on Western Vinyl. Years in the making, it’s really beautiful and special music. I sing backup on a song.

bB: ..And what about Hospitality—working on anything new?

BB: We recently released two subscription-only 7″s through Merge and Polyvinyl, but besides that we’re just focused on the upcoming tour. It’s our first time playing theaters, so none of us know what to wear.