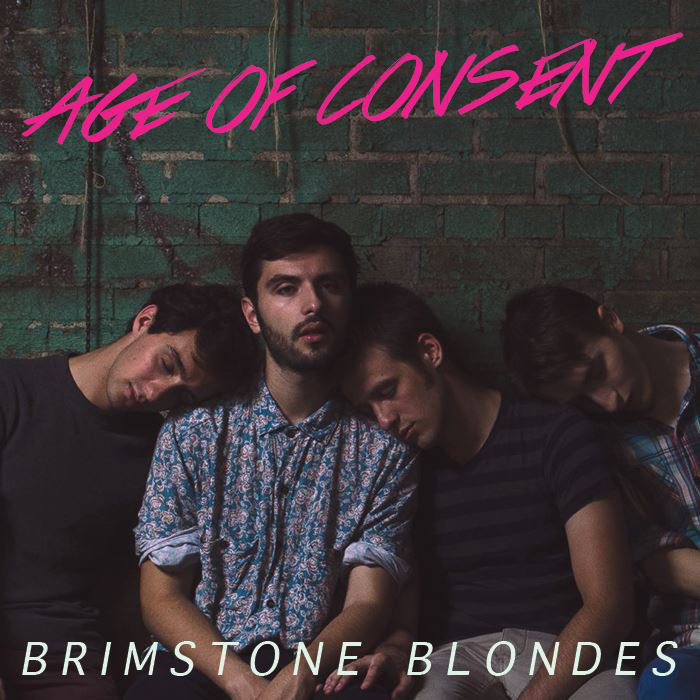 Almost every song on Brimstone Blondes’ new album, AGE OF CONSENT, is a take down of some sort. The targets change and their crimes run the gamut from exploitation to allegations of rape, but lead singer Matthew Danger Lippman feels pretty much the same as he’s pointing his finger: a little superior, a little fascinated, a little impotent and a little weird. He separates the world into the exploiters and the exploited and stands, alienated, on the outside, passing judgment.

Consider the opening track, “The Photographer,” an indictment of creepo photographer Terry Richardson, who has been accused of sexually harassing and exploiting his female subjects (or maybe an indictment of a younger imitator, given that the age mentioned in the song is 12 years off). Lippman is disgusted by Richardson the “ironic pornographer,” but he’s also seemingly fascinated by the fact that he has “all the girls” right up his sleeve.

Despite the sex obsession, the through line on AGE OF CONSENT is not lecherousness. It’s purity. Lippman (or, more properly, the character that Lippman embodies) condemns the criminals alongside the “social smokers” who halfway commit to their values, passions and desires while he is “doing this shit for real.”

The consequence of this purity of heart is desperate loneliness. Pure recognizes pure, and when Lippman isn’t condemning the weak and the vile, he’s looking for a companion that is beyond condemnation. “Lithuania, PA” finds Lippman pining after a native of a small farming town, a “defender of men” who won him over with “pristine persistence.” It isn’t clear if their relationship is romantic in nature: from the talk of “collusion” and mausoleums, it seems more likely that they have teamed up to bury the guilty.

The desire for purity and the fascination/disgust with those who don’t live up to these standards is likely more motivated by anxiety and jealousy than any deep moral code. It’s the defense mechanism that activates when someone walks into a bar and finds that they’re surrounded by fashionable, successful people who look like they exercise. It’s not necessarily that Lippman wants to become one of the beautiful people (even when he imitates a German model on “Do U Wanna Make-Out??,” he stops at first base). But their exclusivity and seemingly effortless success is off-putting. And if their world is off limits to normal schlubs, what else can the excluded do but decide that they’re scum?

It all sounds pretty heavy and serious from that description, but somehow Brimstone Blondes make it fun. The triumph here for the band is that they’ve crafted an album that is weird and cheeky while remaining emotionally honest. More impressive, it’s not a juxtaposition: AGE OF CONSENT feels like a cohesive whole. Musically, it sounds like The Strokes and The Velvet Underground joined forces to start playing dance parties. The vocals borrow from Lou Reed and David Byrne, depending on how weird things are getting. “Do U Wanna Make-Out??” shares a soul with “West End Girls.” Combined with what Lippman’s expressing, the effect is one of righteous unhingedness.

AGE OF CONSENT is out on Admirable Traits Records. The release party is over, but you can still buy the songs here. Check out “Do You Wanna Make-Out??” below.