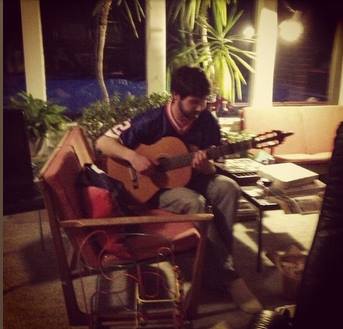 The start of February means the start of another month of Fun-a-Day. The now annual collective project, where people are asked to do something “fun,” normally artistically fun, every day over the course of our shortest, and at least in Buffalo, most miserable month (see outside currently), is a nice way to get through some winter blues. Curated by Sugar City, the finished products will be on display at the DIY headquarters on March 12th.

In what is now becoming a yearly traditional, local singer/songwriter, Alex Berkley, has already begun his Fun-A Day project, following up last year’s ambitious Sick of the Sound of My Voice, and 2013’s 28 Days of Fun. While his 2015 project has yet to be titled, for this year’s album, Berkley has decided set his iTunes on shuffle, and whatever song comes up first, write an original tune about a memory said song conjures. Repeat that process every day for the month and you have his next album.

The shuffle happened to land on M. Ward’s “One More Goodbye” for the first go around, which resulted in “Gold in the Avenue (Day 1),” a track he just posted on his soundcloud page on Sunday. The harmony laced song is a nice mixture of Sufjan Stevens, Mountain Goats, and Beirut.

You can follow his monthly progress here, but in the mean time, listen to “Gold in the Avenue (Day 1)” below.