Sparklebomb – Bring in the Night 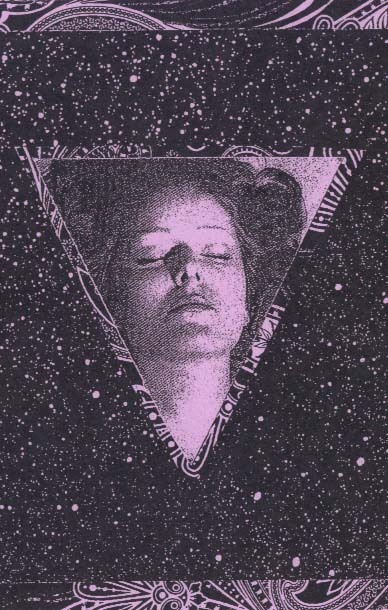 Last year, I was taken aback by just how haunted I was with Funeral Beats, the debut cassette from Sparklebomb, the alias of Angie Conte, one of the city’s more unique and intriguing electronic musicians. Mixing synth beats and textures with samples from found phone recordings, the mini album was a seance, a conjuring of ghosts that has stayed with me since I heard it. So when I heard there would be a follow up tape, Bring in the Night, I was excited to see what Conte had in store next. As I sit with it now, this new tape is as much a step forward as it is an exciting return to these haunted spaces.

On the whole, there is something much brighter about Bring in the Night than the anxious spaces of Funeral Beats. This is not to say the sense of anxiety that hangs over the synth drones has been fully excised nor is it to say that I want that sense to be (as a somewhat anxious person, I appreciate music that captures a certain tense dread), but there seems to be something redemptive or if not redemptive than a sense of release in songs like “Moldavite” and “The Gold Room.” Release might actually be the better term, as the obvious Shining call out in a song like “The Gold Room,” seems to signal an escape or temporary reprieve, precluding the possibility of resolution.

Overall, the whole thing feels like a kind of process or journey. By the time you reach “The Gold Room,” you feel like you have left the anxious space of “Bring in the Night,” and you are simply paused at a point of no return. Regardless of where this point leads, the melody on those later tracks suggests not that this anxiety has left, but rather that it is sitting in the background, leaving you to simply breathe for a few moments.

Bring in the Night achieves the same thing Funeral Beats achieved and that was set me on a chain of thoughts and associations. Honestly, I really like listening to and writing about Conte’s music because it ends up being such an inspirational space, spurring me to consistent interpretation and association. It also makes me want to stop and actually ask the artist a few questions, which is what I did this time around. So, I went and got in touch with Sparklebomb to ask a little about her process and the new tape, and she graciously answered all of my questions with her trademark enthusiasm.

buffaBLOG: It has been about a year since your first tape, what did you learn from the last release and did it any of it shift your process this time around?

Sparklebomb: I learned quickly to record directly to tape rather than fuck around with peoples’ laptops and recording software. Funeral Beats was unique because it was all recorded with computers, and I lost sleep over it as a result. I had virtually zero stress this time around, and the response has been more positive this time. I’m actually pleased.

bB: I am absolutely always floored by your music, it hits me on a very emotional level. When you are crafting songs, where do you pull the initial ideas? Is it a mood, a sound or sample you have heard elsewhere, all of the above? What is your process like?

SB: I appreciate that, thanks! Lonely child, slightly-less-alone adult. I’m bored and alone in my house a lot, and it just depends on if I’m currently in love, falling out of love, feeling the darkness, or just plain miserable. Samples play a big part – I’m queen of calling samples. I’m also constantly taking notes on where to grab samples from. They direct how you perceive the song for sure and I’m still getting used to that as a mostly-lyricless musician.

It always starts and ends with me just turning everything on and letting my “feelings” run amok.

Were there any key touchpoints or points of reference in the album? I think The Shining is one if the final track title is any indication.

SB: Movies have played a big part in my life. I never thought to weave different samples from different movies together, but wow, “This Hour Is Ours” fell into place and based on how I recorded it…I’m not even sure how. It was pure luck.

I didn’t really plan this tape out at all, but I never doubted the results. No real agenda or anything for this tape.

bB: When you are composing songs, do you write improvisationally, just going through and playing around with sounds and textures or do you have a sample or beat in mind that acts as a sort of starting point?

SB: The first channel in my mixer is always reserved for the beat. It’s the foundation that I square away right from the start. Sometimes at that point I grab samples from records or movies & spend unreasonable amounts of time putting everything together. I know all my favorite synth/organ sounds so I pretty much really do just sit for hours in a semi-calculated improv session until I’m freaking out from decent results. Noise is a given, heh, it has a mind of its own yet it’s oddly still malleable.

Thank you to Sparklebomb for taking the time to answer my questions! The tape is available from Prime Ruin right now.