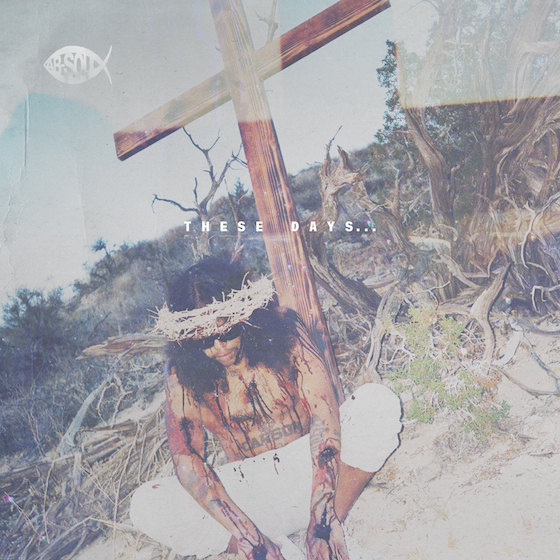 Towards the end of 2012, Kendrick Lamar brought him and his crew into the mainstream with the masterpiece Good Kid, Maad City. Kendrick, ScHoolboy Q, Ab-Soul, and Jay Rock had been releasing high quality free projects and independents albums for the last few years as the collective Black Hippy, and after Kendrick’s success, it became a waiting game to see who was going to follow him into the spotlight. ScHoolboy released his first major album, the well received Oxymoron a few months back, and saw some notoriety with singles like “Studio” and a feature on one of Macklemore’s singles.

Ab-Soul has been looked at as perhaps the best lyricist in the crew, and his previous project, Control System, lets listeners into his warped thoughts and conspiracy theories, while demonstrating great technical ability. He’s proven time and time again that he has the talent to be one of the best rappers on the planet, so his major label debut has been hyped up by fans as something that could rival the likes of Kendrick’s album and stand as one of the best releases of the year. We found out this week that sadly this won’t be the case.

An intro is often the most important song on an album, it draws in the listener and makes a statement about what the album will sound like. “Gods Reign” featuring label-mate SZA is an uninspiring, if not boring introduction to this album. I wouldn’t have thought this song would have even made an Ab-Soul project, let alone been the intro to his major label debut. The hook is just atrocious. I haven’t been impressed by anything SZA has done since she teamed up with the newest Black Hippy Isaiah Rashad on his excellent first project Civilia Demo. On there, her voice was whispering, melodic, and understated. On here, her moans are annoying and I can’t wait for her part to be over. I hope she doesn’t become the go-to for hooks within the crew, because this was just bad. Ab doesn’t sound off on the song either. He has the potential to drop the verse of the year at any point so when his verses are forgettable, it’s a real negative.

“Tree of Life” was one of the lead singles, and I still think it’s the best song on the album. It has what so much of the album ends up missing: a good beat. It’s a head-bobber with consistently good and varied percussion. Ab’s contribution is also one of his more polished efforts, discussing how integral trees are to everything while creatively throwing vegetation terminology into his lines. It also has a pretty awesome and relevant sample from Joey Bada$$’ “World Domination,” and I’m a sucker for a good Joey song.

“Hunnid Stacks” is another pretty solid song, featuring ScHoolboy Q and an uncredited Mac Miller on the hook. My problem with it is it really doesn’t hold to the absolute bangers that Ab and Q have created in the past. “Druggys Wit Hoes” and “Druggys Wit Hoes Again” have superior beats and have a replay value that I’m not quite sure this one has.

And here lies the problem with this album: bad beats with no replay value. I will never listen to “Dub Sac” again. “World Runners” featuring Lupe Fiasco could have been the track of the year. Lupe is a proven lyrical genius and basically a hip hop legend, and Ab got him on the album. Are you telling me that this basic ass beat, complete with cheap Skyrim sounding choral voices, is the best they could do?  Lupe brought it too, that song just sonically doesn’t cut it.”Twact” is  just a DJ Mustard rip off, and it doesn’t seem genuine knowing we’ve seen and artist like Iggy Azalea top charts using the style.

I would’ve liked “Kendrick’s Interlude” more a year ago, I don’t need angry Kendrick on an improved jazz beat, I just want an honest verse. “Closure” is supposed to be a touching, emotional moment for Soulo but it’s too boring from the start for me to get into, I’m sorry. “Sapiosexual” should have featured “mosquito” because that’s gotta be what J. Cole sampled for part of that beat The drums are pretty groovy though and I do like the back and forth hook with the chick. “Stigmata” could’ve benefited from more Bronson. I don’t care how good Ab-Soul’s spoken word is on the closer, a 23 minute track is obnoxious unless it’s perfect. There’s 19 minutes of this song without music! How do they expect anyone to listen to this more than once?

Maybe the best beat comes from Like of Pac Div, and Blended Babies on “Just Have Fun.” It’s got that cloudy, classic Clams Casino feel to it, and Soul does it more than justice. I think he definitely showed he is a great rapper on the album, but he hardly has that Rap-God potential that he tries to paint with some of the track names and that god-awful cover.

This album just underachieves. A song like “Ride Slow” is pretty good, but with names like Danny Brown, Earl Sweatshirt, and Mac Miller all on it, you’d expect it to be a track of the year candidate. It’s one of the 3 or 4 songs I’ll take away from this album, but in a few months, I’ll forget all about it. Ab is good, this album wasn’t. I don’t think it comes close to Control System, and to be honest, it’s probably the worst Black Hippy release since their come-up.