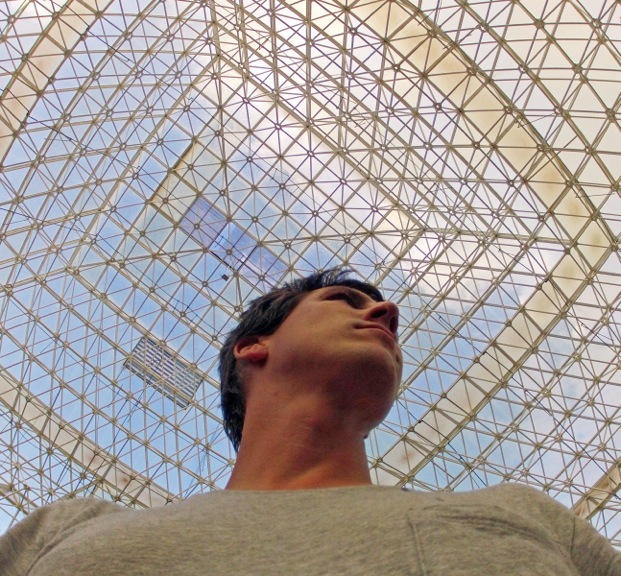 Leaves cover the ground in a rural area of Vermont, where musician Nick Zammuto—known for the wildly collaged pop music he made with indie rock band The Books in the early 2000s, and for his heart-achingly beautiful and weird solo material—wakes up and feeds his kids. After having breakfast with his family he takes a short walk to a small cabin a few yards away—originally an unfinished tractor garage, which he converted into a studio by adding everything from a floor to insulation and soundproofing—where he’ll spend the day combining basslines and chopped up vocals, cryptic samples and driving drums. On a nicer day, he might chop some wood first or check on his bees. He harvested his own honey for the first time this fall, with the help of his wife and mailman.

Zammuto lives a homesteader life, in which everything from his music to his music videos are do-it-yourself and produced in a self contained environment; his 16 acres of land in southern Vermont where he turned a “ramshackle farm building” into a home for his family. It hasn’t been all good times and fun for Zammuto, though. In 2012, his long time band The Books—himself and cellist Paul de Jong—ended a 12 year run during which time the band churned out groundbreaking collage pop records like their 2002 debut, Thought for Food, and their final album, 2010’s The Way Out. Though Zammuto hasn’t talked much about the circumstances behind the break up of The Books, it was, by what little account there is, a rough break up that forced Zammuto to consider giving up music all together. He bounced back pretty quickly, though, and only a few months later released his debut solo album Zammuto, an experimental electronic album that pitched between spastic drum beats, heart wrenching vocals, and strange samples. In September, Zammuto released a follow up, Anchor, a beautiful, cold, haunting, and rhythmic set of songs that have changed the way the band performs live. After opening for Gotye earlier this year, Zammuto brings their headlining tour to Mohawk Place on Thursday, November 6th. This week, we talked to Zammuto about Anchor, and how he learned to build a catapult, harvest honey, and bend sound.

Cory Perla: How long have you been living in Vermont?

Nick Zammuto: We’ve been here for about eight years. I was born down in DC but moved to the Boston area pretty early on. I grew up there. I met my wife out here in Western Massachusetts and Southern Vermont and we eventually settled down here after moving around for a while.

CP: I hear that you are harvesting your own honey now.

NZ: Aw man, it’s really the best honey I’ve ever had. Mostly because of the satisfaction of having done it ourselves and the amazement of watching this bee hive grow over the summer. The most dangerous part is you have to go up there and take the bee frames, the honey frames, out of the hive. They’re just covered with bees, like not an inch without a bee on it. My wife is the brave one and she puts the space suit on and goes up there and takes these things off in one motion. She shakes all of these bees off of the frames, and then scrapes off the comb, squeezes it out, and it’s ready to eat.

CP: Had either of you ever done it before? How did you work up the courage to do that?

NZ: No we hadn’t. Well, our mailman is a bee keeper of almost 50 years and we always wanted to try it. When we found out he could sell us a queen, we decided to go for it. Whenever Molly [wife] had a question she’d just call up our mailman and he’d come up and help us. It’s a very mysterious process. I don’t think anybody has really figured bees out.

“I’m very interested in translating sound into something visual, so the idea of bouncing a laser off of a vibrating surface, seemed like an obvious thing to try.”

NZ: It’s an idea I had a while ago. When I was studying the visual arts the way I got into music was by making paintings and drawings, and then sculpture. Then I started incorporating sound into the sculptures, and that’s when I bought my first real audio recorder. I was hoooked. I love sound as a sculptural medium. I’m very interested in translating sound into something visual, so the idea of boucing a laser off of a vibrating surface, seemed like an obvious thing to try. It’s pretty simple, you just attach a flexible mirror to a speaker and send whatever sound you want through it. We’ve sold about 30 of them and it made the record [Anchor] happen. Without that fundraiser I would still be working on the record. 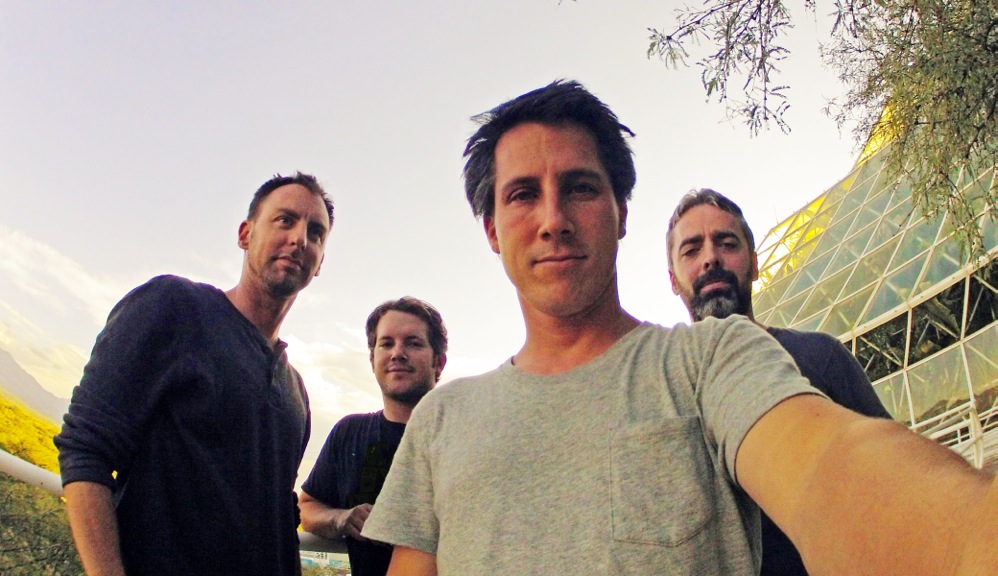 CP: What was it like writing and recording Anchor?

NZ: I did it in the winter, and I think it translates to the sound of the record. It’s very much a winter record in the sense that it’s sort of purposefully quieter, more internal and little bit darker than my previous work. I kinda wanted to go in that direction for a while. Trudging through the snow to get to the studio is always fun. My studio is a tiny little space and I try to keep it nice and warm in there so there’s just a strange sensation of being in this little warm oasis in the middle of this frozen world, being able to look out the glass door and see the snow blowing around. That was really the inspiration of the record; trying to make music that made sense in that space at that time.

NZ: Oh, definitely. That was part of what was in my mind while I was making Anchor; I wanted to make something that had some really interesting performable songs in a way that would expand the live set. We have been able to round out our set in a way that makes it so satisfying to play. My musicians are killing. The band sounds incredible right now. My drummer [Sean Dixon] has become a real collaborator. My brother [Mikey Zammuto] plays bass and he holds it down pretty well. Nick Oddy, who is a friend of Sean’s, is our guitarist now.

CP: You released your first solo record just months after The Books broke up. You’ve stated in the past that when The Books broke up you considered giving up music all together. What pushed you to continue on?

NZ: I’m just compelled to do it. There is just so much ground to cover that I haven’t covered yet. As long as people will let me keep going, it’s what I want to do. People have come forward and said “keep going,” and that’s what I’ve done. Having a long term music career is exhausting. At this point in my career I’m damned if I do and I’m damned if I don’t. No matter what I do people will criticize me but I don’t care about that side of it anymore. I just want more direct contact with the fans, and luckily, I’m in a place where we can do that and keep it real.

CP: You’ve referred to The Books in the past as collage-pop, how would you describe Zammuto in contrast?

NZ: I think one of the reasons I chose the name Zammuto [for the band] is because it has no meaning. It has no direction to it necessarily when you see the word. Some people think it’s Japanese, some think it’s Italian, it could be anything. And that’s what I intend to do with the music, it really could be anything at any time and really it’s almost like a yoga exercise to make music for me. I’m a white guy from the suburbs, I don’t have a culture other than consumerism and I’m doing everything I can do get away from that all of the time, but at the same time I feel homeless in terms of my musical roots. I just want to work in unexplored territory, that’s my goal. Finding these unknown frontiers.

CP: I’d like to talk about your song “IO” which totally threw me off the first time I heard it because it is really a pop song through and through and I don’t think people expect that from you.

NZ: It started out with that really weird synth melody that came from another project and I kinda transplanted it. I thought you could drop a really cool beat over that kind of in a standard way. So I just decided well I’ve never really yelled before, I’m going to try that and see what it feels like, and it felt good. I don’t know if I’ll do it so much in the future but maybe, it plays live really well. Genre is such a superficial thing to me. I don’t listen to music that way. For me it’s just all about the details and how things fit together. If I feel like I can get away with it, I’m going to try it. There are some things I just have to try. Since the song is kind of about a catapult it allowed us to build an actual catapult for the music video.

CP: So, who actually designed the catapult used in the “IO” video?

CP: How did you learn to do something like that? What are you schooled in?

NZ: Chemistry [laughs]. I studied chemistry in college and then kind of got into the visual arts late in school and then kinda got into music from there. Chemistry gave me this technical background and I love the technical side of things. That nerdy, endless exploration of knobs and buttons and stuff. We were forced to build our own house up here because we didn’t have any money to speak of, but we had time. So I thought “well I’d better figure out how to build stuff.” Building a house is the best way to learn carpentry. By comparison, constructing a catapult is pretty easy.

CP: Watching the video, it seems pretty automatic, but were there any challenges?

NZ: Yeah, it took about five days. I went to Home Depot and bought about 600 dollars worth of lumber and I looked at it and I thought “Oh shit, this is never going to work,” but I looked at various designs online and did some basic calculations to figure out if it was going to break when I loaded it up with weight. Our first few launches were failures but we fine-tuned it. Now I can launch a full-sized pumpkin over 350 feet. It’s spectacularly efficent at throwing things.

CP: What was the most satisfying item to launch out of the catapult during the video shoot?

NZ: A lot of things. People picked up on the computer thing: We launched the computer that I used to make The Way Out. I edited a feature length documentary about the Biosphere on it too. It eventually died and I just had it sitting around and I’m like “well that’s perfect amunition.” You know, there was something really cathartic about lauching that into the air having spent so much time with it. I’m afraid people took it as a dis to The Books, which it totally was not. I loved The Books and it still is a huge part of my life, but it was pretty damn satisfying to see it fly up into the air and then finish it off with a sledgehammer. I was ready to let go.

Cory Perla is the music editor for The Public.