Zak Ward – That’s What You Get 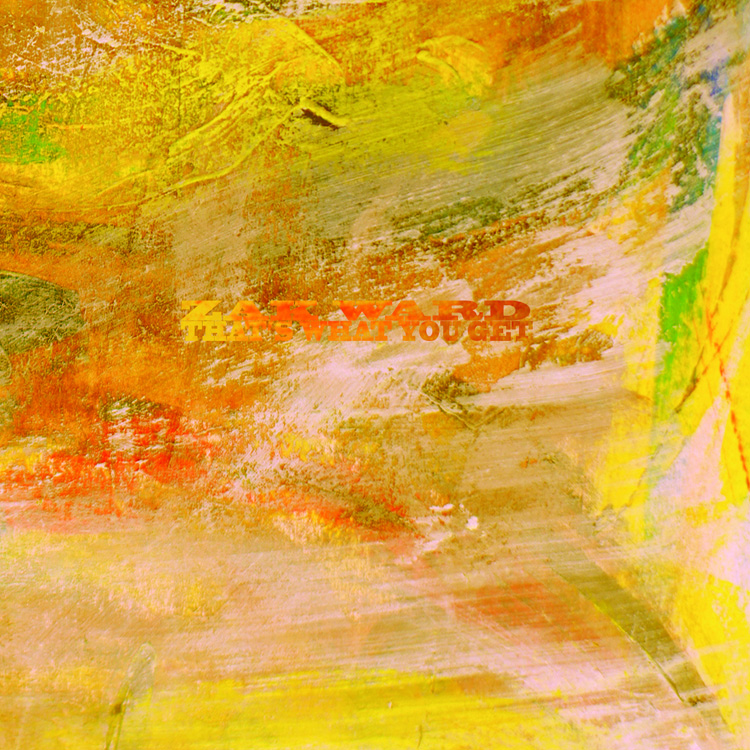 Like a lot of people, I’ve always had a tendency to associate the music I listen to with a certain season. Sometimes there are objective reasons for this, certain sounds do traditionally pair well with particular times of the year, and sometimes it can be entirely subjective, such as when you only relate an album to a certain month because it just happens to be the first time you listened to it.

Zak Ward’s new EP, That’s What You Get, released just this past weekend, would seem to qualify on both fronts as it’s an album that easily evokes the feeling of an early fall and happens to have arrived just as we’ve probably finished seeing 60 degrees in Western New York until 2015.  (The cover of the album might also help to inspire this autumnal connotative value with what looks to be a canvas brushed with a palette of colors stolen from an October landscape.)

The album starts with the title-track, a nearly five-minute confident slow burner, with an excellent vocal turn from Ward, that’s exemplary of the sort of subtle atmospheric musical embellishments found elsewhere on the album. Ward’s vocals cut through a shifting haze and unexpectedly gain altitude throughout the song until they sound as if they’re being beamed back to earth from a satellite.

Things pick up considerably on second track and lead-single, “Who You Really Are,” which is an excellent example of Ward’s ability to marry catchy alt-country melodies with spacey effects that lend a slightly alien edge to the familiar. It’s a testament to the quality of the production work on That’s What You Get that this wouldn’t sound at all out of place as a second hidden track on Wilco’s Summerteeth after “Candy Floss.”

The centerpiece on the EP, “You’re Not Alone,” finds a home somewhere between My Morning Jacket and CSNY where the former Son of the Sun front man sings of the foreboding need to “change direction” and paths that have led him astray. Ward’s insistence that “you’re not alone,” however, is given interesting context by a haunting wordless vocal outro and a whimsical, circular melody that could cause you to question whether “not being alone” in these circumstances is meant to be a good thing or a bad thing.

“Sing a Song” is a pretty, dreamy folk song that sounds like it could have been recorded on someone’s back porch, but benefits greatly from added layers of sonic texture which, among more traditional instrumentation, gives the vague feeling of humming machinery and the subtle, high-pitched chirping of musical insects.

The final track on the EP might be the best of the bunch and also might be the best example of Ward’s ability to create a subtly ominous environment and combine it with his sharp ear for melody and chord changes that feel friendly and approachable without ever feeling worn. “Lost” is an excellent Fleet Foxes-inspired number that spins and shambles in slightly menacing fashion, appropriately capturing what it might feel like to actually “get lost” (physically, mentally, or maybe both) on a dark night when the weather is getting cooler.

“Lost” is also another great example of Ward’s use of creative musical flourishes to bring unexpected nuance to the atmosphere of an otherwise relatively straightforward arrangement. (See here: the [flute-type?] instrument that always reminds me of a wayward spirit drifting through woods and shimmering guitar tones that feel like the headlights of a car going for one of those aimless drives Ward suggests in the lyrics.)

That’s What You Get doesn’t reach for terribly deep narratives, but the sentiments are honest and the lyrics are never awkward or distracting. Interestingly though, Ward does sometimes cleverly clip his song titles out of lyrics that represent sentiments opposite from what might be expected when the titles are taken out of context.

“Sing a Song,” for example, might seem like an innocent suggestion for a way to happily pass the time until you hear it’s taken from the line “I can’t ‘sing a song’ to save my life.” (It’s difficult to imagine this is true, unless Ward happens to run into a murderer seeking to be serenaded that has unusually high standards.)

Similarly, “That’s What You Get” would seem to be the sort of thing one would say to an opponent who’s just gotten what they’ve deserved, though in the song, Ward (again, somewhat self-deprecatingly) flips this into “that’s what you get… for loving someone like me.” (There’s a lot of empty space to fill in what “someone like me” might be like, but it’s easy to imagine that it’s not exactly a positive suggestion.)

Whether it’s just that alt-country with looming unsettling undertones seems to work perfectly when the rest of the world is dying around you, or that I just happened to first listen to this in October, That’s What You Get is smart, well-written, extremely well-produced, and a welcome addition to the fall ’14 soundtrack (but, you know, listen to it whenever you want).