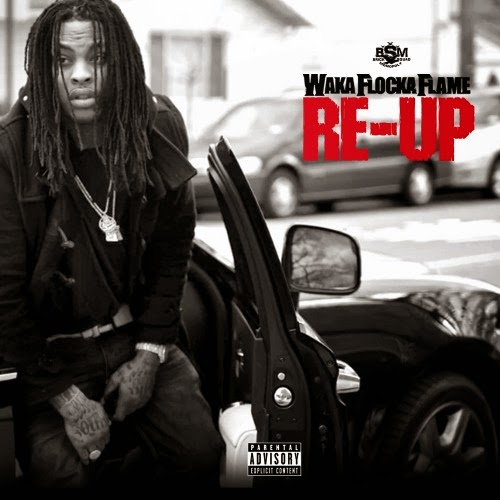 Waka Flocka goes hard in the motherfuckin tape on his new mix, Re-Up, an 11 track compilation with solid production and clever collaborations. His much-anticipated album, Flockaveli 2, doesn’t drop til later this year, and this mix will carry you through til it’s release.

Fellow Atlanta rapper Young Scooter is featured on the 808 Mafia produced second track, “Cook Jug,” and has one of the catchier hooks on the mix. Both “Lottery” and “Ain’t No Problems” have that signature Waka sound, and the latter has verses from oddly charismatic ATL rapper Young Thug and Judo.

“Word to the Wise,” an impeccably produced track by up and coming rapper-turned-producer Metro Boomin, is one of the strongest on the tape, and it’s worth mentioning that Metro is only 19 years old. He can’t get into the clubs that play his music, but that’s what house parties, like the one in “Real N!gga Love,” are for. Featuring the OG of putting dollar signs in your name, Too $hort, it’s a banger, with Waka rapping about liquor, molly, weed, bad bitches, and turning the house into a club.

Former graffiti artist Gepetto (government name: Brendan Hanna) mellows the mix out on “Ghetto Child,” a synth-y and chill track that gives you a moment to relax before going to the next track, “Work It Like A Pro.” Featuring English-Caribbean rapper Giggs, it’s the perfect track to dance to like you do it in the mirror.

The tape closes with the old-school sounding, Macon Hamilton featured, “Knowledge God,” a track that could easily fit in on a mixtape when they were actually tapes. It’s a surprisingly solid ending to the mix, and makes up for the first track, “Fuck N!gga,” which is easily my least favorite of the compilation.

Overall, this is a solid mix that’s been on repeat in my headphones for the last two days, and is available to stream and download for the low, low price of free99.