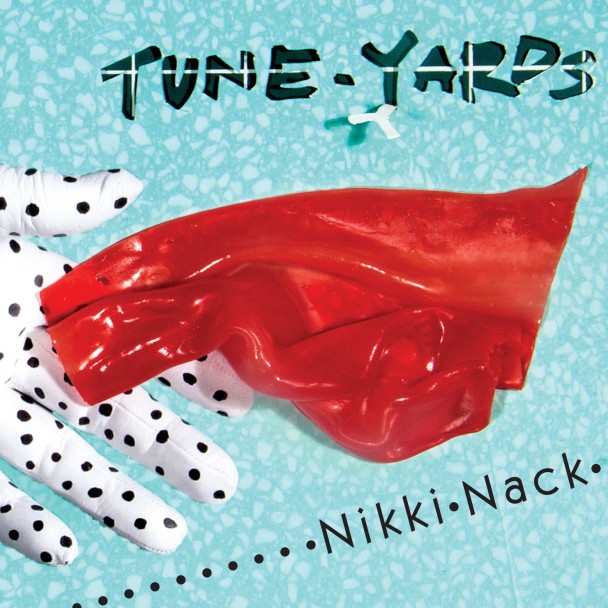 If ARTPOP was a small trip into Lady Gaga’s creative mind that tried to combine art and pop culture into one musical form, then tUnE-yArDs’ new album, Nikki Nack, is a full on exploration of pop culture sweetly crafted into an unorthodox collection of rhythms and beats. The omni-present creative force behind tUnE-yArDs, Merrill Garbus, who also doubles as lead vocalist and a multi-instrumentalist, decided to switch the production team behind her third album, making it one of her most sonically pleasing to date.

What has always stood out in Garbus’ music is her almost childlike appearance in accompanying music videos. One of her trippiest to date, in which she tackles the issues of undrinkable water in a very Saturday morning cartoon kind of fashion to mask the harsh topics at hand, is for “Water Fountain.” Garbus flaunts her signature quirky personality through multiple eccentric poses and places her restless stamp of importance on the lyrics by demanding attention in saying ”Nothing feels like dying like the drying of my skin and lawn. Why do we just sit here while they watch us wither til we’re gone?” Not only does this song invent a practical way to approach subject material that may seem off-putting for some mindless music lovers, but it also has highly infectious chanting making it a more than suitable first single choice.

The follow-up single, “Wait For A Minute,” begins to unravel just how the new production team has influenced tUnE-yArDs’ sound, becoming a more refined, genre crossing collaboration of worldly influences rather than previous album releases like w h o k I l l and Bird-Brains. This track in particular has a calmer vibe with a mesmerizing synth flowing on top of a heavier bass line. The vocal talents of Garbus shine on the song as it proves to be adequate testing ground for her slowed down, mellifluous voice. Looking at the sheer cover alone for this song sparks a never-ending mental image of Pee-Wee’s Playhouse while the sonic nature of the song enhances all that encompasses his erratic, oddball lifestyle.

Building on those similar sort of pop sensibilities are the tracks “Find a New Way” and “Real Thing, both feature strumming percussion beats over a complex arrangement of electronic elements. Later on, Garbus takes a trip into the eerie abyss on “Time of Dark,” before the album  offers a salute to living on “Hey Life,” a song that feels destabilized at moments due to its tempo switches, but ends up being memorable because of the slick, repetitive notes Garbus sings throughout.

Considering the immense success w h o k i l l  yielded for tUnE-yArDs, it’s easy to see that the pressure to construct an equally significant and captivating album was a lofty task that could have crumbled underneath its own expectations. However, Merill Garbus held true to the deeply rooted, socio-political messages in her music and dually brought in some of the most experienced producers to advance her career.