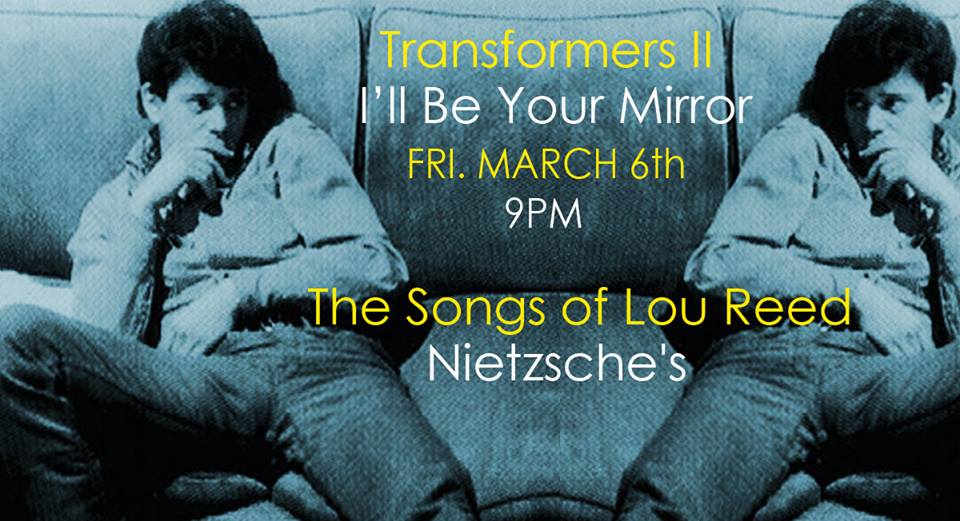 The massively influential rock musician, singer and songwriter Lou Reed may have passed in October 2013 – succumbing to liver disease less than six months after he underwent a transplant of that same organ – but his legacy, as they saying goes, continues to live on.

To honor the underground rock icon, Nietzsche’s will be holding its second annual Lou Reed birthday party, appropriately titled “Transformers II: I’ll Be Your Mirror” (Transformers, of course, is the Reed solo debut that introduced him to a larger audience, while “I’ll Be Your Mirror” is one of the more melodic songs off the Velvet Underground’s debut, and one of three tracks sung by Nico). Reed would have been 73.

The lineup is quite eclectic: fitting for the risk-taking, ground-breaking artist who lent so much to punk, alternative rock, glam, noise, experimental rock, avant-garde rock and industrial.

The lineup includes the gloomy synth-pop of the Small Smalls, rock ‘n’ roll vets The Good, and the painfully named Norwood Kicks. Expect plenty of punk, too, with the awesome punk cover group the Card Cheats, and Wooden Waves, another local group that describes their sound as “Nervy Northeastern United States Surf Rock & Swim Punk.” More simply put, it’s an upbeat combination of indie-rock and post-punk.