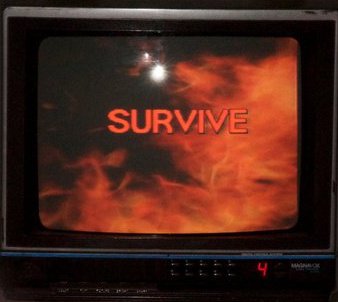 Halloween’s not quite over yet for Buffalo this year. In a pretty damn good year of shows one of the most surprising and pleasing gets of 2016 is After Dark Entertainment’s bringing Austin TX electronic band SURVIVE to the Waiting Room tonight. SURVIVE has had an interesting and probably thrilling 5 months due in no small part to their participation in creating the tremendously effective soundtrack to Netflix’s summer blockbuster hit Stranger Things, a ridiculously dense and pleasing homage to Spielberg, Stephen King, and the early 80’s that virally conquered the pop culture zeitgeist upon it’s release in mid July.

The band has enjoyed the increased exposure, releasing Stranger Things soundtrack albums along with a new album in September, RR7349 embarking on a national tour that brought them to our fair city. This show is a must for WNY Stranger Things obsessives and fans of 80’s flavored electronic minimalism, and a real coup for After Dark. Opening the show will be Northampton Massachusetts cinematic prog band Dust Witch. Tickets are $15, doors open at 7pm and the show starts at 7:30pm.