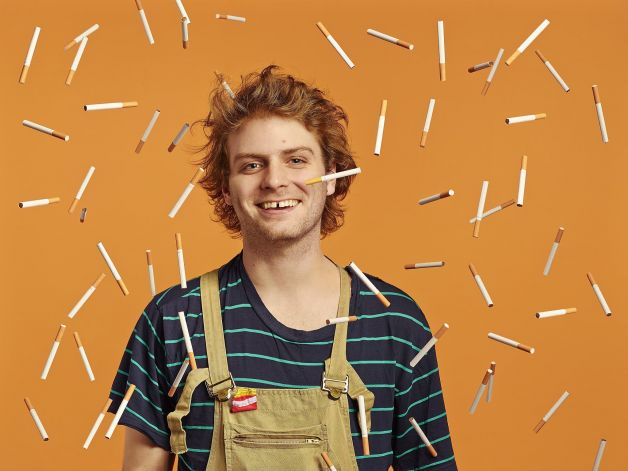 Mac DeMarco gets called a slacker a lot, but that’s only half the story. He reminds me of this kid I went to high school with: let’s call him Mike. Mike, I imagine, was a precocious little youngster, and very bright. Rolling with ease right over the kindergarten curriculum, it didn’t take long for lil’ Mike to get tracked into the gifted program.

The gifted program was not much more than a get-out-of-jail-free card. Gifted students, it was assumed, didn’t have much to gain by attending regular classes. Give them a place to go that’s free of structured drudgery and their little minds would flourish all on their own.
Mike, bless him, was gifted enough to see not only the pointlessness of his general education classes, but the pointlessness of signing up for field trips and academic triathalons and all the other carrots that the gifted program offered. And, given that the program was without a stick, he showed up every day to high school in the same pair of gym shorts, stoned out of his mind. But he still managed, thanks both to his natural intelligence and to grade inflation, to graduate with a 5.0 GPA

Mac DeMarco is a musician, not a high school student, but if you listen to his Live and Acoustic: Vol. 1 tape, you’ll see what I mean. He’ll sing sincere love songs about his girlfriend in a charming, effortless falsetto and interrupt the applause with an enormous belch.

And as talented a musician as DeMarco is, one of the things I find most fascinating about his music is the way that his recordings (especially the most recent ones) comment on and construct this character. His latest, Salad Days, is about being 24, but it feels very specifically about Mac Demarco being 24.

Well, duh, he wrote it, but songs like “Blue Boy” are much more interesting to think about when contemplated as DeMarco’s reflections on his reputation for slackerdom:

“Blue boy, worried about the world’s eyes
Worried every time the sun shines
Worried about his haircut
Calm down, sweetheart, grow up.”

The album is shot through with this kind of sentiment: knowing that you’re young enough to tell yourself to “grow up,” feeling old enough to actually do it, and all the time trying to remind yourself that part of growing up is not taking yourself that seriously in the first place. The title track starts with the line “As I’m getting older, chip up on my shoulder” only to end with “Oh mama, actin’ like my life’s already over/Oh dear, act your age and try another year.”

DeMarco, and I imagine my high school buddy Mike, are (in my overactive imagination) struggling with the same precipice in life: twenty-four years young and feeling ambivalent about the fact that the appearance of effortless slackerdom has brought effortless success. They’re aware enough to realize that it’s silly to feel too badly about this, but they’re still working at building the personality that will allow them to try hard enough to do the great things that people seem to think they’re capable of. And they’re haunted by the knowledge that the slacker’s gym shorts look a little pathetic on someone a little older than 24.

Mac DeMarco plays at the Tralf tonight, with Delicate Steve and Lesionread opening up for him. Doors at 7, show at 8. Tickets, if you haven’t got them already, cost $16 plus TicketMaster’s wildly immoral service charges. Check out Mac DeMarco singing live and acoustic and alone below.