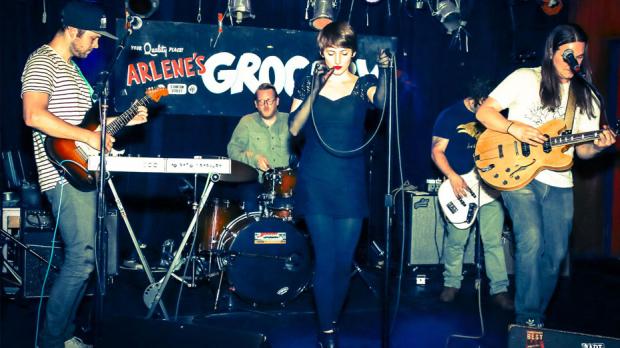 In elementary school, I had this friend named Gillian (spelled the same way). She was a fearless girl careful coordinate every outfit, had every hair on her head neatly trimmed, was clear and concise, but was also totally unafraid to throw down on the monkey bars, make up  Britney Spears songs by herself at recess and live in an eccentric bubble of her own.

All of this comes to mind because it seems to be an adaptive description for Gillian the band (hear me out on this one). The quintet has a sound that’s super cohesive and well thought out, but entirely daring at the same time. It’s a cool fusion between 70’s disco and 80’s power rock, all housed under an undeniably catchy umbrella of indie dance pop. The alternating male/female vocals add a fresh and sonically pleasing dimension to it all.

The New York City band recently released a five song EP titled Colorize and has kept up a strong momentum in terms of touring by playing shows scattered across the East Coast and even completing a venue residency in NYC.

Luckily, you can catch this infectious band along with local favorites at Sugar City later tonight. Also on the bill are locals Aircraft, Bryan Johnson & Family, and newcomers, Cooler. The show is only $5 and starts at 7pm.