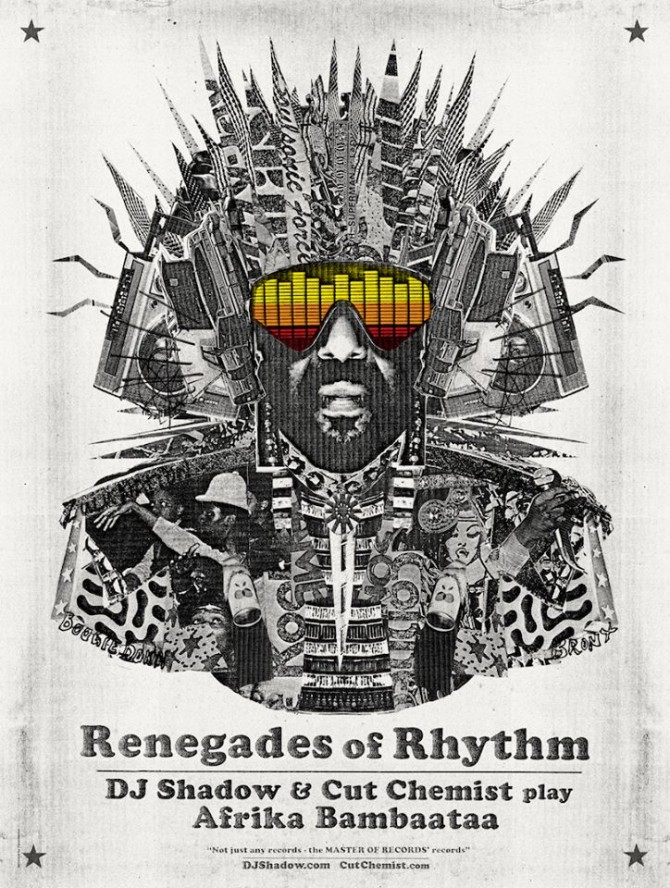 Once upon a time too long ago DJ’s used turntables to maximize flow, records were heard and no one stood; dancing was better and the music was good. There was a young DJ who was misled; he thought a laptop playlist could make him bread.

When DJ’s stop creating and start pushing buttons both metaphorically and on Serato, the art of actual turntablism is lost, but tonight in Buffalo, two of the genre’s greatest combine forces to rep the music of yet another musical innovator.

Presented by MNM, a local promotion company with global reach, this stop on the Renegades of Rhythm tour is easily one of the best shows to hit Buffalo all year(s). When two of the best in the game come together to celebrate the work of  Afrika Bambaataa (aka Kevin Donovan) you don’t sleep on it. Genre-shaping hip-hop electro legend and founder of the Universal Zulu Nation, Bambaataa’s entire body of work is now housed at Cornell’s Hip Hop Library, where he is currently a visiting scholar.

DJ Shadow, the DJ and producer responsible for bringing trip-hop to the musical lexicon, emphasizes that the records being spun (on six turntables!) are the originals from Bambaataa’s collection, the “master of records’ records.” Since his acclaimed 1996 debut, the sample-heavy Entroducing, Shadow (government name: Josh Davis) has been a mainstay, helping to develop and shape the instrumental aspect of hip-hop.

The other half of the Renegades of Rhythm is frequent Shadow collaborator Cut Chemist. The DJ and producer (birth name: Lucas MacFadden) has an extensive body of work both musically and in film (catch his cameo as the chemistry teacher in Juno)  is an avid crate digger, who admits “we definitely over pulled” when selecting records for the tour. The careful consideration when curating the music for the tour wasn’t lost on Bambaataa, who fully endorse the duo: “DJ Shadow and Cut Chemist are going to blow your funky mind.”

Doors for the all ages show open at 8, and ticket prices start at $27.50. Openers include 716 staples DJ LoPro and DJ Cutler, along with Brooklyn native turned Buffalo resident DJ Marcos Udagawa.