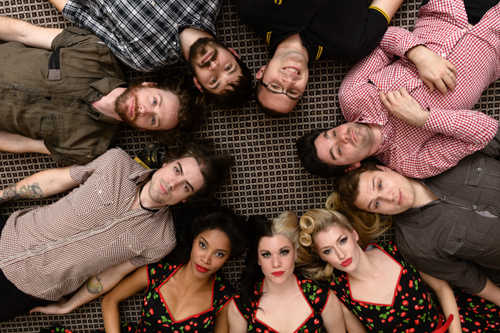 What do you have planned tonight? No seriously what do you have planned tonight? Binge watching Scandal on Netflix? Watching two football teams with cliché archrival namesakes battle it out on the televised gridiron? Yeah, that’s pretty much what I thought. It’s nothing that cannot be rescheduled or caught up on at the water cooler tomorrow morning. So, why don’t you make your way down to the Waiting Room tonight and catch Big D and the Kids Table?

Big D has always been that punk/ ska band that has just always sailed right underneath the Royal Navy’s radar, letting them coast right through customs. There are groups of musicians who play music together and then there are bands. Bands consist of people who are bound together by something bigger than themselves. Big D and the Kids Table is a band, one that is celebrating more than 14 years together, a feat on its own.

For those who haven’t been to the Waiting Room in a while, you will notice that they have done some renovations and opened a new studio space upstairs. The studio is roughly half the size of the downstairs Waiting Room venue. It is open Wednesday through Saturday to feed all of your bored restless ambitious. The self-described “American Gypsies” Big D will be bringing the circus to the Waiting Room’s studio tonight along with the B-Side Basterds, The Barksdales and Chester Copperpot. Doors open at 6pm and tickets are $15.