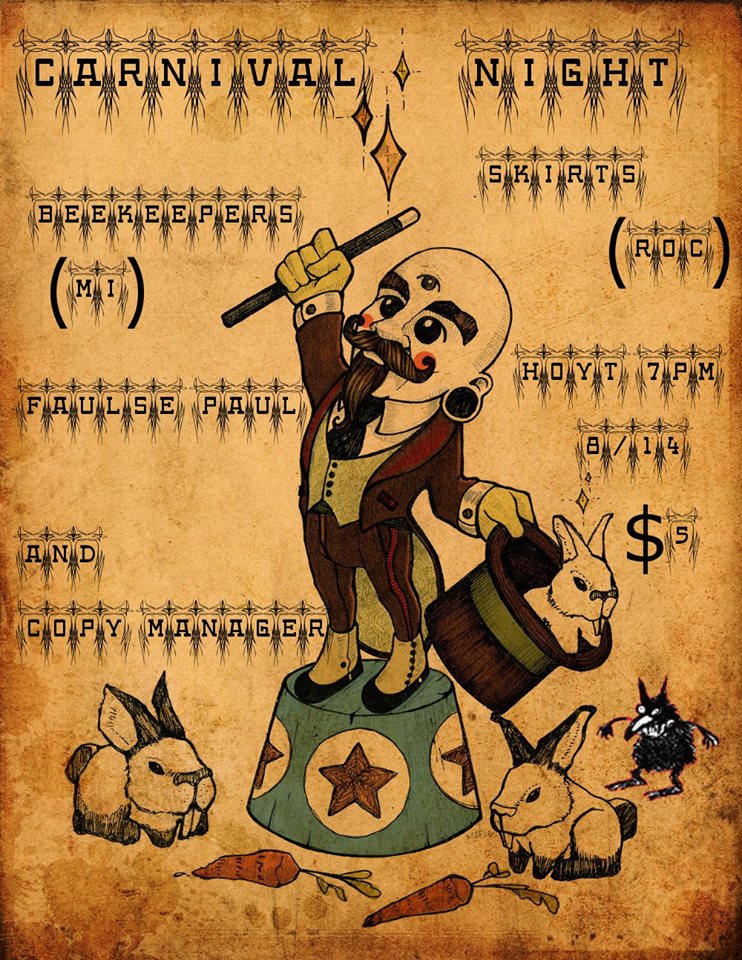 Carnival Night by Shaken Stylus means that there will be balloons, silly string, kazoos and beach balls at an undisclosed location tonight. It means late evening fire hooping by Kayla Hoop. It also means four fine musicals, Beekeepers (Detroit) and Skirts (Rochester), along with locals Copy Manager and False Paul.

It’s been a chilly, gray, rainy and dreary week, so a carnival sounds pretty alright to me. Beekeepers is a great fit for the theme, too. Their music is sometimes boppy, sometimes jazzy, sometimes dark and usually fun in the eccentric and unsettling way that a carnival can be.

Skirts, meanwhile, are a bunch of blurs, blending the lo-fi vocal hooks of the Marked Men with surf rock, the Cure and the ever-present influence of the 90s. These songs will be fun to stomp around to, but produced differently, could have also showed up at a killer prom scene in a Clueless sequel.

Copy Manager is your favorite source for lo-fi songs about everyday heartbreak. False Paul are swagger and shouting and aggression.

Show starts at 7 pm. It’s five bucks at the door, though if you show up in costume or with party favors (including, but I’m sure not limited to “silly string, streamers, balloons, beach balls, kazoos, confetti poppers”) you’ll get a dollar off. Facebook event here, if you’d like to go and don’t know where it is, I’m sure you can find someone there who will tell you.