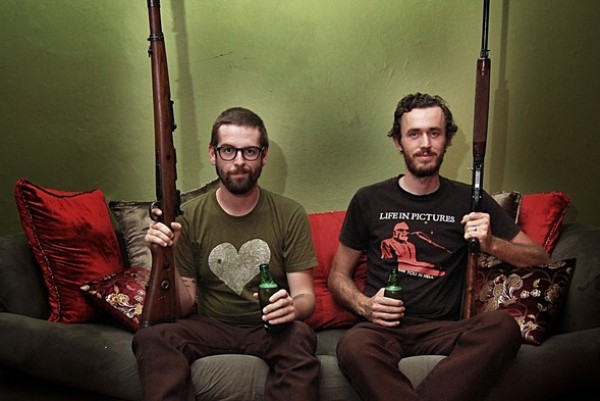 Folk-punk duo Andrew Jackson Jihad, consisting of Sean Bonnette and Ben Gallaty, surely have a way with words. The first line that struck me from the group was “There’s a rapist and a Nazi living in our tiny hearts.” Even though the initial reaction is to sit back and protest—“I am certainly not a Nazi,” the underbelly of the statement means that we all can be evil, we all have the capability to damage and create chaos. Such is the vein that most of the songs AJJ runs along. They’re critical masters. In the song “FWP (Fuck White People)” they take a political dig at the larger representation of the good old USA “First they take the land, then they take the soil, and with their bloody hands, they dig for oil.”

This past May, AJJ released Christmas Island, an album that featured a more orchestral sound. Lyrically, Sean Bonnette didn’t stray from his generally satirical and witty repertoire. “Getting Naked And Playing With Guns” shakes hands with “FWP” and “Brave As A Noun.” After listening to their live shows, the duo creates an inspiring sensation. Tonight they’ll be working alongside Lansing’s Cheap Girls (listen to “Her And Cigarettes”) and Dogbreth at the Waiting Room beginning at 7pm. A $17 that’s well worth every penny.