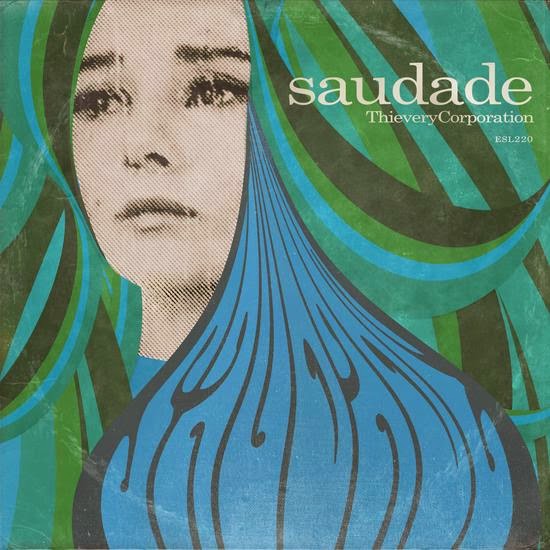 Rob Garza and Eric Hilton are busy guys. Since forming Thievery Corporation in the late ’90’s, they’ve produced eleven studio albums, with the release of Saudade as their twelfth. Normally when one thinks of Thievery Corporation, they are associated with the acid-jazz movement and over-dubbed relaxing reggae. For the duo, things are shifting with this new release. What drew them together is the Brazilian-born genres of music that can be seen here in purely classical form on Saudade. After straying and exploring several elements of the electronic world, as Garza says, ‘it’s us coming full circle from electronic music back to something organic.’

The Portugese word ‘saudade’ means “a longing or something or someone that is lost, a contented melancholy, or, simply, the presence of an absence.” This is an appropriate titling for the group and the musical shift they are exploring. Sometimes, in order to get rid of that feeling of loneliness, emptiness, going back home is important. Rediscovering what inspired the adventure in the first place can help make sense of this ‘saudade.’ Each track is undeniably sensual, supported by Thievery Corporation’s subtle electronic compositions on most, and given a mystical, siren like quality through the large roster of guest female vocalists (established friend LouLou Glelichkhani, Nouvelle Vague singer Karina Zeviani,  Elin Melgarejo, Argentine Natalia Clavier, and former Bitter:Sweet member Shana Halligan).

Infused in each track are the elements of bossa nova, a Brazilian genre that spans the gap between samba and jazz. Noticeable on the first track of the work, “Decollage” features a soft-strummed classical guitar without a harsh plucking from any sort of pick. It’s minor accompaniment from the piano can barely be heard and gives the immediate track an entrancing quality, wholly melancholy. One can hear the aloof, broken quality in LouLou Glelichkani’s voice. Cleverly titled, once again, a ‘decollage’ is the process of creating an artful image by cutting or tearing away. “Meu Nego,” “Sola In Citta,” and “Quem Me Leva” are partners to “Decollage” in the sense they feature a coquettish touch paired with ruminating, spacious percussive instrumentals.

“Firelight” and “No More Disguise” traverse Thievery Corporation’s older sound, with vibrating synths cradling the angelic, distant vocals. Here again the feeling of saudade rises: “The world is an illusion of dreams/ we’re playing roles in silent movies” to “our broken shadows rising from the walls, memory recalls visions of this.” Stylistically, using only female vocalists definitely relays the delicate and fragile state of the term. Although, not only women feel this type of longing. Only one track on the album is without a vocalist, and that is “Saudade.” In classical bossa-nova length, the song is short, about two minutes long, with a pensive guitar melody and percussive clave-pattern. A quiet pause before the richness of the second tranquil half of the album plays.

This is certainly a return to home for Thievery Corporation, and it’s a much welcomed return. Their skill for creating a cohesive theme is set in stone. Each song flows within each other like a hazy river, each building upon one another into a waterfall of blissful sound encapsulated by the feeling that overcomes us every so often, saudade.