Jake Smith of The White Buffalo 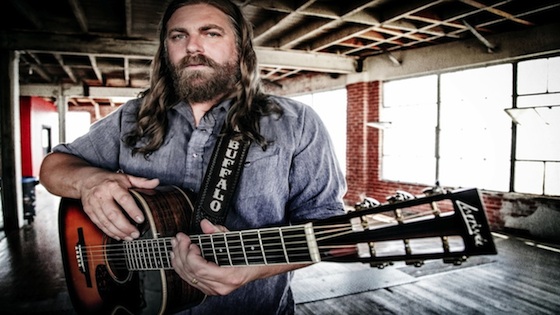 Jake Smith stands in the back hallway of The Irving Plaza, the music venue that lives in the East Village of Manhattan. Smith’s band, The White Buffalo, will be playing in a few short hours, along with co-headliner Chuck Ragan, a tour that Smith’s publicist has personally coined, as ‘the manliest tour.’ After one look at Smith, you can see why that title just may stick.

“That’s a little strange,” he says of the tour’s coined nickname, “But in a lot of respects, there’s not a lot of bullshit on this tour.” He adds, “we [Ragan and opener Johnny 2 Bags] all write honest songs and try to form them unabashed, and without compromise, we try to write good songs, songs that people can believe in.”

When your wife informs you that she has been cheating on you with another man and is leaving, Jake Smith is the kind of man that you hope she is leaving you for. Rather than a pencil necked paper pusher from the DMV, Smith is a mountain of a man. When you look into the forty year old’s green eyes, you can tell he’s been around the block more than once. Smith is more man than you will ever be. He stands at over six feet tall, and his long lightly salt and peppered hair is pulled back into a loose ponytail. Smith is a musician that you may have never heard of. He may be the best musician you’ve never heard , but trust me, you’ve heard him, especially considering he has now written and recorded eight songs for FX’s highest rated program about outlaw bikers. With his thick beard he looks more like a character from Sons of Anarchy rather than just a musical contributor to the series’ soundtrack. Not too bad for a guy who didn’t pick up a guitar until just after his nineteenth birthday.

“I didn’t come from a musical family. My mother played a tiny bit of piano.” he says in his gravelly voice. “I only knew like three chords, so the early stuff was pretty primitive.” He says with a laugh. “It was definitely trying to be more hard edge, which in turn it probably was less hard edge,” he laughs again. “It was trying to be punk. It was more full of angst and just taking broad strokes at society, and shit like that.” He says, of his early days.

Smith’s latest album, Shadows, Greys & Evil Ways, is anything but punk. Shadow’ is a throwback to when country music, was, well, country music. Back when The Highway Men ruled the Nashville air waves. They say write what you know, but then again Johnny Cash never shot a man in Reno, now did he? “I’ve written shadowdy songs and murder songs, but I’ve never murdered anybody. I’ve had hard times just like anybody, but I’d say I’m a pretty positive person.” Smith says of his songs subject matter. “Songs are funny things, initially they are just little pieces that come out of nowhere, but they [songs] don’t write themselves, and every part, every word counts.”

Shadows is a departure from the the Huntington Beach native’s debut, Once Upon a Time in the West. “I’ve always wanted to write a narrative, a story, and I had all of these songs, and I thought if I arranged them properly I could make them about these characters. These songs are a bit more reflective I think.”

The narrative of Shadows, Greys & Evil Ways follows Joey White, a small town misfit who goes to war and returns home only to be greeted with more violence as he struggles to readjust to a life and reunite with Jolene, the girl he left behind. “Deep down it’s a love story, I think.” Smith says.

The abum is much more somber than it’s predecessor, Once Upon a Time in the West, which is not an homage to the infamous, Sergio Leone film. “It was more the idea of me growing up in the west, that album is much more nostalgic, and full of more personal songs. But there are still some old timey, and western themed murder ballads on there. It’s once upon a time in the west, my west.” He says with a smile. “I do love that film though.”

When Smith and The White Buffalo hits the stage at 8:47, the room is electric. Smith’s raspy voice booms through the room like a lighting bolt, and everyone stands at attention. This was the same show where co-headliner Chuck Ragan gave his $320 Red Wing boots to a journalist who was interviewing him, but that’s not what I will remember about that night. What I will remember the most about that night at The Irving Plaza is how much the seven hour drive was worth it, even if I did drive from Buffalo just to see another Buffalo…