The Traditional – How To Live Without Blood 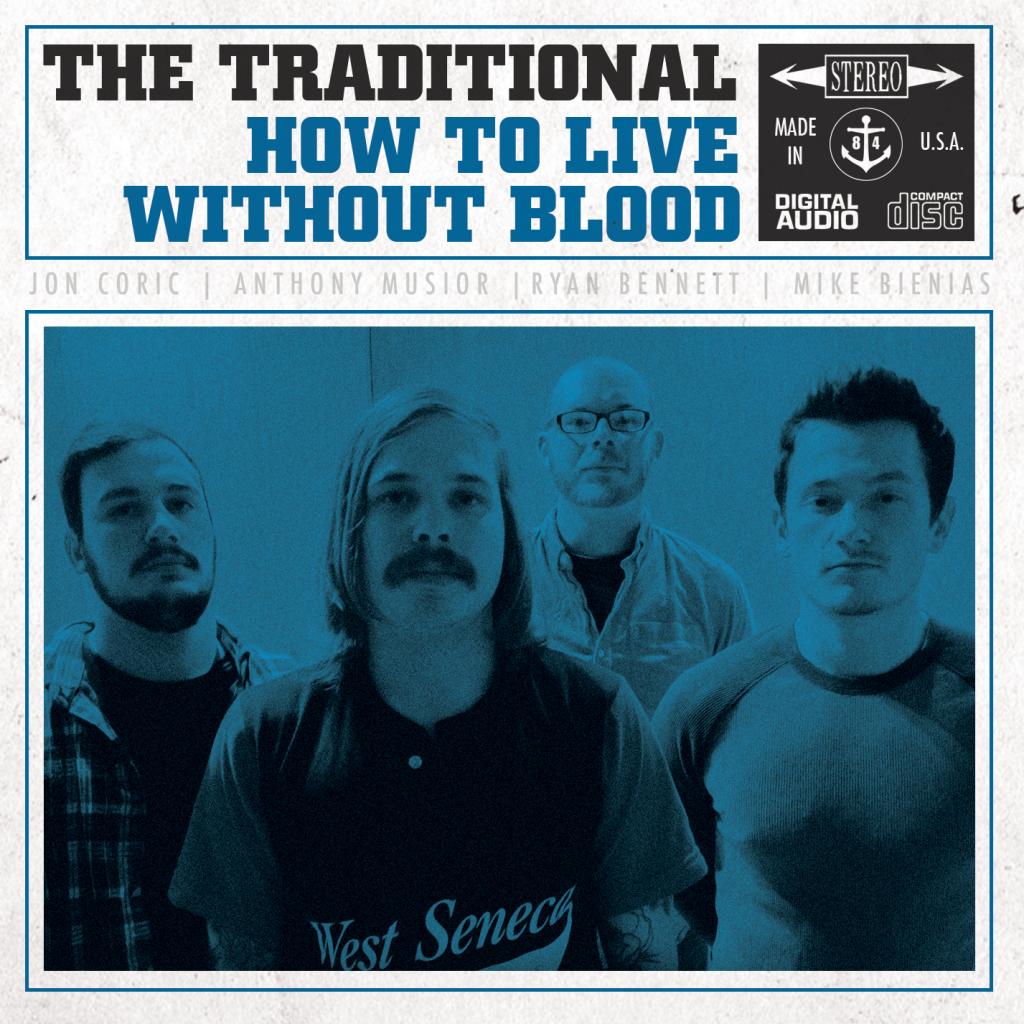 “So I’ll sort through the shorts of this ashtray of my past and smoke one for every time I was happy… I’ll smoke one if I’m lucky.” Harsh, maybe… But it’s just one of many curses that fill How To Live Without Blood, the latest release from Buffalo’s own The Traditional. Singer/bassist Anthony Musior is no doubt this band’s songwriter, filling these songs with powerful personal references and thinly veiled attacks about the heaviest of subject matters.

Musior, or “Mewsh” as most of the world lovingly knows him, has been working towards this moment for a long time. That’s not to take any of the onus off of guitarists Ryan Bennett and Mike Bienias, or the pristine backup vocals of drummer Jon Coric… Collectively, The Traditional is one of the hardest working bands in Buffalo. But with only an EP and a split to their name, How To Live Without Blood feels like a long-awaited answer to a nagging question. Finally, The Traditional have a record deal and now they get to release their big, 10-song banger… did I mention it comes in vinyl?

The Traditional occupy a space between straight-up rock and passionate emo. The songs on HTLWOB sound huge, polished and professional (so chalk up another win for veteran Buffalo engineer Jay Zubricky too). Don’t get me wrong, the emo influence on these songs is undeniable… But here, you won’t find a smattering of jazzy, sensitive chords. This band excels at keeping it simple; the guitars are huge, the drums are catchy, and the solos are dead on every damn time. What’s more, Musior is a distinctive front man and a very talented lyricist. Beyond even the strength of his vocabulary is his ability to tell it like it is. His songs were meant to hit hard and they do.

For those of you wondering, The Traditional doesn’t sound enough like another band to make a good comparison (Seahaven meets Taking Back Sunday if I had to), but for first-time listeners, I recommend the straight onslaught of “My Brother Is The Sea” or the crisp swagger of “Constant Battle (Let It Go).”

HTLWOB is truly best enjoyed from the start. “Skeletons” functions perfectly as the aggressive album opener, indicative of The Traditional’s use of relentless guitars and half-screamed backup vocals. But where Bienias and Bennett are a constant assault, one of my favorite parts of HTLWOB is the vast spectrum of moods that the band seems to effortlessly cycle between. Where “Skeletons” is aggressive, “Marilyn” is upbeat… almost fun (except to maybe Marilyn, who’s being reminded that she’s “full of shit”).

Anger is the most common emotion that bubbles to the surface of HTLWOB, but Musior either can’t or isn’t trying to hide a sense of deep desperation. It’s a subtle overtone, but that feeling of helplessness seems to be fueling Musior’s rage in the first place. First single “Do You Miss Me Yet?” has the ever-powerful imagery of barreling off the top of the skyway at 110mph. Title-track (and my personal favorite) “How To Live Without Blood” has Musior singing “You’re the blood in my veins, this is how to live without blood.” People have been breaking Musior’s heart for a long time. Even after only one listen, it’s pretty obvious how sick of that he must be.

The album ends with “Run” and “I’m Not Coming Home With You.” Friends of Musior might recognize “Run” and “Home” as skeletons (pun intended) from Musior’s solo release Done. But both songs get the full band treatment on HTLWOB. “Run” is sure to be a Traditional signature, acting as the album’s dark, self-referential slow burner. “I’m Not Coming Home With You” is the album outlier – a duel between Musior and a mysterious female, probably too drunk to talk and past the point of reason. The ending is unexpected.

2014 saw a resurgence in popularity of a number of talented emo-tinged bands. Big things are happening to bands like The Traditional… and in an underdog, blue-collar town like Buffalo (these guys just happen to be big Bills fans), The Traditional understand what it means to work for what you want. I think 2015 is the year they might get it.

Be sure to catch The Traditional at the release of How To Live Without Blood on January 24, 2015.