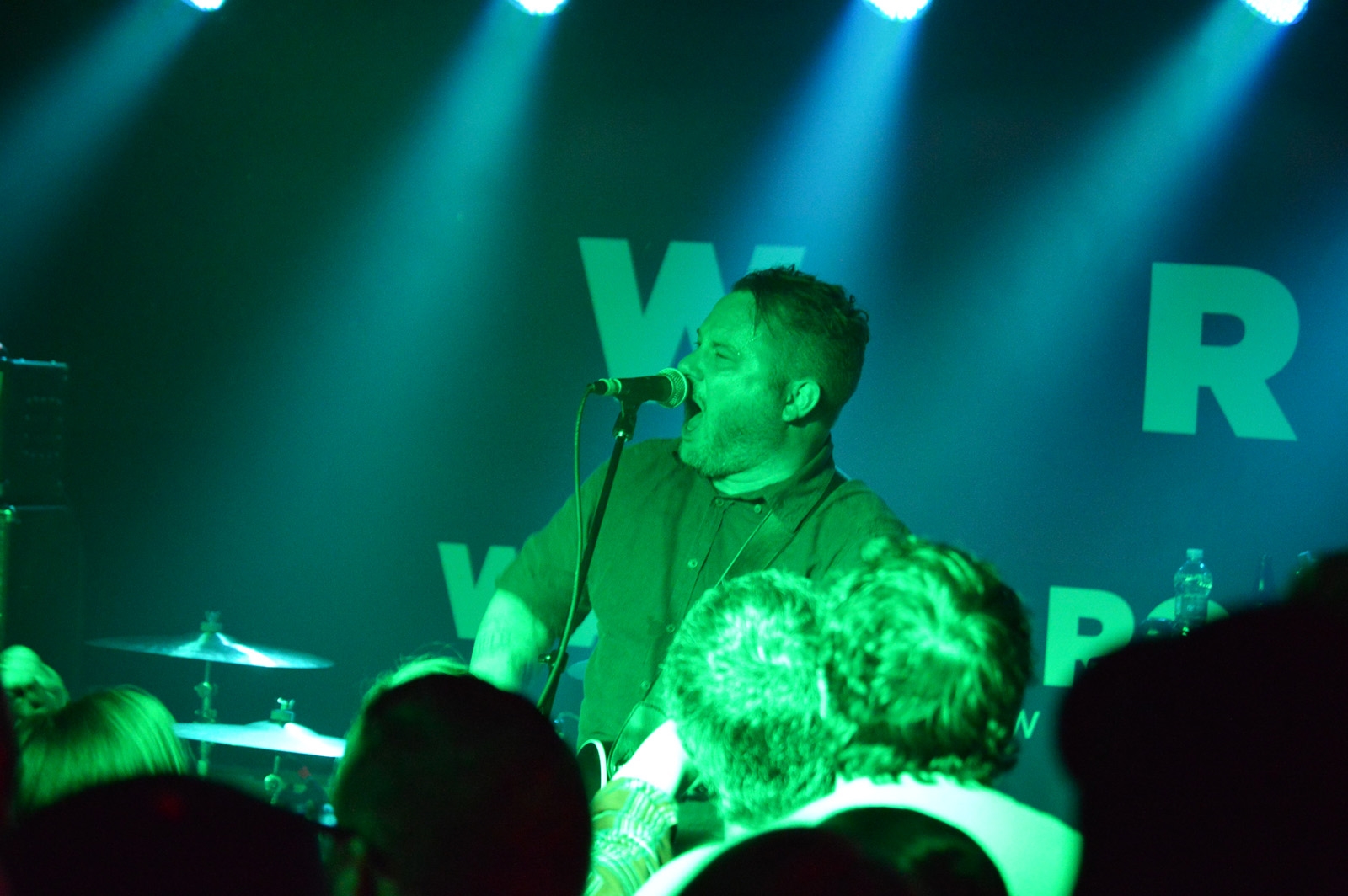 With a belly full of Joe’s Deli and two very heavy eyelids, I made my way to Waiting Room last night to see The Get Up Kids (TGUK). Approaching the door, I couldn’t help but calculate the median age of the crowd, which was probably somewhere around 27… Let’s just say that in lieu of x-ed out hands, I saw parents checking nanny cams on smart phones. Pixie cuts and shaved heads were a plenty. Ironically, TGUK were out on the “Spring Break” tour – I’d bet only 15% of the crowd was actually on spring break.

I walked in on song two or three of Restorations’ set. The band’s vocalist reminded me pretty strongly of The Gaslight Anthem. They had a “vibey” feel. I enjoyed their set, but I spent most of it trying to find a comfortable place to lean my ragged 25 year old body.

PUP took the stage next. Hailing from Toronto, they made a pretty funny joke/backhanded compliment about knowing what it was like to have the worst hockey team ever. I will definitely give them credit where credit is due – they put on a great show. But beyond the exciting stage theatrics and four-man whoa-ohs, by that point, I was aching for TGUK to hop on the stage.

Before the set, I fanboi’d with my buddy Jon and gossiped about what song they’d play first (we were right, “Holiday” from 1999’s Something To Write Home About). Truthfully, it’s hard to explain just how quintessential of a band TGUK is… Suffice it to say, I saw representatives from many Buffalo bands, including but not limited to: M.A.G.S., Del Paxton, The Traditional, Pentimento, The Slums, High Teens, I Can See Mountains, and even Every Time I Die. To describe TGUK as “influential” is an understatement.

Right off the bat, TGUK slammed through “Holiday,” “I’m A Loner Dottie… A Rebel,” “Valentine,” “The One You Want,” and “Anne Arbor” (my personal favorite). Singer/guitarist Matt Pryor’s voice has withstood the test of time – he sounds just like he did in 1999. Pryor has a wry sense of humor and he made several tongue-in-cheek comments, including several about being an emo band, a pigeonhole that they spent years trying to avoid (a highlight was, “let’s get emo” before a flawless rendition of “Valentine”). With a prolific career like his (TGUK, The New Amsterdams, The Terrible Twos, and his own solo career), it was hard to judge how Pryor was feeling about playing 20 year old songs. On the other hand, co-singer/guitarist Jim Suptic seemed a little more ecstatic to be out on tour, waxing poetic about the first song they wrote together 20 years ago, “Woodson.”

Suptic also made a wise crack about how the band hasn’t been out on tour in several years: “It’s mostly because we all hate each other. Just kidding, thank you for being here 20 years on.” Pryor looked on, shaking his head with a smile on his face.

At this point, the crowd was growing noticeably more tired/drunk. I witnessed a passed-out dude being carried out by his buddies, but the magic was far from over. The encore started with a TGUK rendition of The Cure’s “Close To Me,” one of my favorite cover songs ever (off of the b-sides album Eudora). Besides two more incredible performances of “Action & Action” and “Ten Minutes,” some lucky lady got a ring during “I’ll Catch You.” I’m not sure I could have asked for a better set.

As the few brave twenty-somethings made their way upstairs to pop-punk karaoke (featuring TGUK as the live band for “Holiday” for some lucky individual), I made my way to the door with the other 80% of the crowd. I had to be up at 6:30am after all. Adulthood.

Photo by Cody Osborne of Buffalo.com