The Front Bottoms – Back On Top 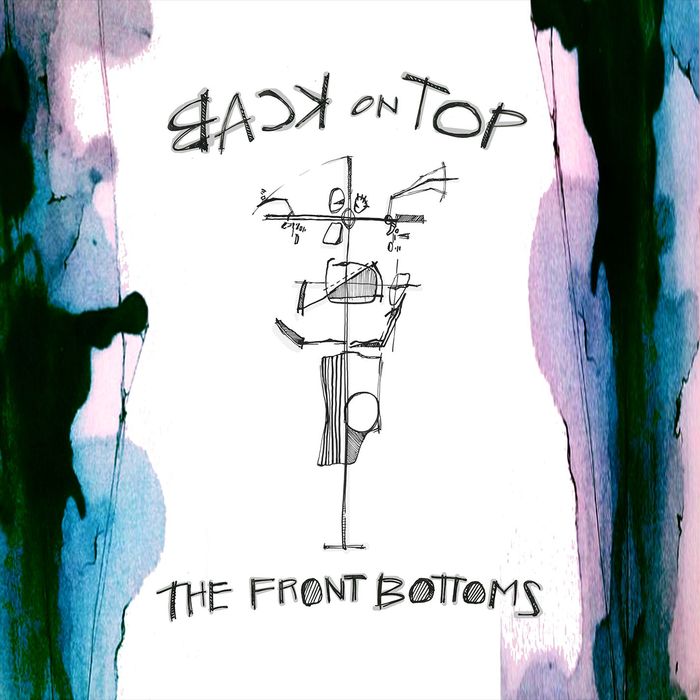 I’m not sure if it was the choice of the Front Bottoms or their new label, Fueled By Ramen, but in an exceedingly strange move, prior to the release of their new record, Back On Top, SIX of the record’s eleven songs were made available to the public. Why they did this, I’m not too sure, but what I do know is that coming from someone who had this record as one of their most anticipated of the year, it almost totally killed all of the hype behind it.  That’s not to say that the tracks they released were bad or anything, but knowing what half of the record sounded prior to the release really was a buzz kill.

The release of the first track, “West Virginia,” actually came as a pleasant surprise. The band had taken a somewhat more advanced approach to song construction, and vocalist Brian Sella’s lyrics seemed as on point as they had been in the past. But with each of the following tracks, the quality seemed to diminish. In the end, though, the songs honestly grew on me a lot more than I thought they would. As I began listening, I couldn’t help but feel like these tracks are missing the same sort of raw emotion and charm that Talon of the Hawk had boasted. Well, the charm was there, it has just been repurposed in a way.

Simply put, these new tracks as a whole just aren’t as aggressive as FB’s past few releases, and while that it something fans may not enjoy, it is nice to see The Front Bottoms try to take a more instrumentally mature approach to songwriting.  I respect the risk, and ultimately, it is really something that pays off to an extent.

The major drawback to their more instrumentally mature approach is actually the vocals that accompany them. If the band is trying to go with a more serious style of instrumentation, Sella should really to start writing some more serious lyrics to accompany them.  While this is far from an issue on most of the record, there are some absolutely cringe worthy moments, including the track “2YL” where Sella sings “With you grindin’ up on me, and me grindin’ up on you / I bet we were beautiful.”  It is really a disappointment to me that what might be the most honest, tender moment on the entire record actually comes in a surprise verse from rapper GDP at the end of “Historic Cemetery.”

Even with that being said, I don’t hate it.  Almost all of the tracks ended up growing up on me in some way, whether it be the simple, yet genuine track “Cough it Out,” or the silly guitar solo filled “Motorcycle” or “West Virginia,” this is unmistakably a Front Bottoms record. I can’t stop myself from smiling at points while listening to Sella bounce over the drums and acoustic guitar; most of the record is just a fun time. As fun as Talon of the Hawk may be though, I’m still not too sure. The band creates some incredibly catchy hooks and melodies throughout, as they always have, and you’ll no doubt be tapping your feet and singing along after just a few listens. It’s clear that the Front Bottoms still possess that special charm that launched them into to popularity in the first place.